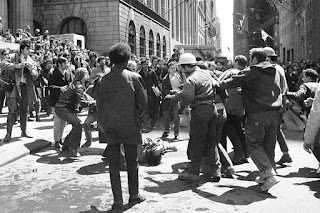 In May, 1970, I was just out of college and working in downtown New York City for a large brokerage firm.  The Viet Nam war was stirring up raw emotions.  Young people wanted nothing to do with the war.  Lots of other people thought the war was necessary to stop the march of communism.  Veterans of the war just wanted to forget what they had gone through and to not be disrespected for their service, much of it involuntary.

Lunch hour one warm spring day there was chanting and commotion in the streets.  War protestors (Hippies) were marching through the streets chanting that clever 1,2,3,4 thing, hollering obscenities and basically poking those who disagreed with them with a virtual stick.
Downtown NYC at the time was crawling with construction workers.  Many old buildings were coming down or being renovated and many new ones were going up.  The World Trade Center was still not completed.  The construction workers, many who were war veterans were not happy with being poked by a virtual stick.
They reacted.
The construction workers charged the “Hippies” with two-by-fours.  Heads were cracked, faces bloodied, chaos ensued, there were no police stepping in to stop it.
I walked out of my office building to see what was going on.  I was young, my hair longish, my position on the war ambiguous, after all I had dodged the draft via a C-6 vertebrata fracture.
“What’s happening?” I asked a longhaired agitator on the run.
“Construction workers are beating the crap out of us, get off the street, they’re clubbing hippies!”
“Us?” I thought.  “I’m not us.”
“There’s one over there…get the fucker!”
I looked around and they could only be talking about me.
“Shit!”
I ducked in the building and went back to work.
It was some scary shit.
Young people with long hair making a lot of noise.
Construction workers, many back from a war they were forced into, veterans who were booed and spat on when they returned from hell, decided to turn on the smug college hippies who made their sacrifice seem meaningless.
Idiots like myself who almost got caught up in the fracas.
In 1970, you were a Capitalist racist war monger, or a smug hippie fuck.  There was no in-between on the street.
In 2017, you are a racist, xenophobic, anti-Semitic barbarian, or a love- trumps-hate defender of all injustice in the world.  There is no in-between on the street.
In 1970, the way to shut down those deemed to be smug hippie fucks was to beat them with a club.
In 2017, those deemed to be racist, xenophobic, anti-Semitic barbarians are ripe for clubbing.
In 1970, long hair and a young face is all it took to be a target; there were no questions asked.
In 2017, wearing the wrong hat or thinking the wrong thought will brand you a target for faceless thugs with a club; no questions asked.
Me? I’m staying out of the streets until people go back to thinking and talking instead of branding and clubbing.
Dylan was wrong.
Posted by joeh at 10:45 AM