“What’s that?” Mrs. C asked me the other morning.

“What’s what?”  She always hears stuff before me.

“Someone is on our deck.”

“Probably the neighbor.” We have a tiny deck that abuts to our neighbors tiny deck separated by a high fence.”

I later went downstairs to make some breakfast.  I pulled up the blinds on our sliding doors to the deck and was greeted by this little fellow. 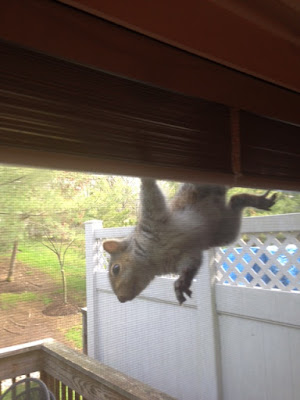 I watched him for several minutes, sometimes nose to nose.  He did not seem concerned as he hung onto the screen, his tiny claws fit into the equally tiny screen holes like Velcro.  I had to finally slide open the door to shoo him away, and even then he did not feel like moving.   I don’t know why I shooed him away, he wasn’t really hurting anything.

He is just a little guy, probably one of this year’s babies.  Perhaps the nest is under the deck.  Do they sometimes nest on the ground…I’ll have to Google that.  I think he just feels safe on that screen, able to watch without fear of anything sneaking up from behind, even me, and with the ability to quick run under the deck if need be.

Is he on his own?  Did mama and or daddy squirrel leave him alone or did they meet their demise? Can they fend for themselves at this young an age? I hope so, he is a cute little guy. 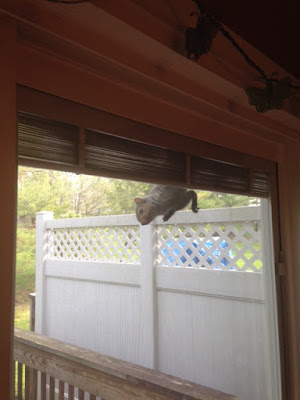 Funny thing about squirrels, people love them or hate them and sometimes both.

They are cute and acrobatic. / They are rodents!

I love to watch them run and play. / They are bullies and cheat the birds out of seed!

They seem friendly. / They’ll get in your attic if they can and make a mess!

My mom hated the squirrels because they dominated the bird feeder.  She bought and tried many squirrel defenses, and they always figured a way around them and into the seed.  I shared her dislike for their bird seed thievery, as if the birds wouldn’t do the same if they could, and yet I did enjoy watching them.

After breakfast, I went upstairs for a while before deciding to hit the basement for guitar practice.  On the way to the basement I saw my little friend, again clinging to the screen.  I went over and nose to nose said hello.  This time I did not try and shoo him away. 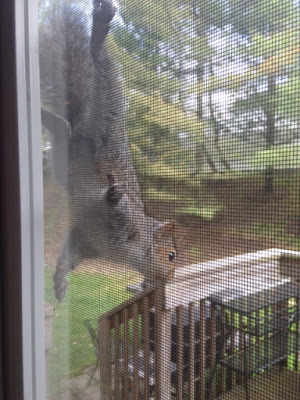 I think I may have a new friend.  I probably should give him a name.

Suggestions?
Posted by joeh at 9:12 PM