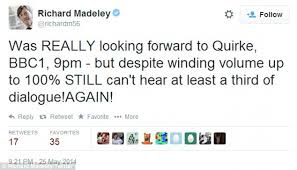 I often complain about whispering on TV shows and movies.  Actors today seem to believe that whispering their lines is more dramatic and effective.  Sometimes they do the “loud” whisper which makes no sense.   Mrs. C says it is my hearing, but she has trouble with dialog also, she just doesn’t admit it.
In the days before microphones actors projected and annunciated their lines.  The ability to project and annunciate clearly was what made a skilled actor.  When artificial amplification came into play, projection and annunciation became less important.  If you look at movies from the forties and even the early fifties, the acting seems almost silly and not at all natural.
Modern actors learned to rely on amplification, and use different voice levels to convey mood and drama.  Good stuff, but currently this is overdone.  The dramatic effect of low talking and mumbling is fine, except if you don’t know WHAT THE FRIG THEY JUST SAID, it makes enjoying a story very difficult.
For a while, I could just turn the TV volume up high during whispering scenes, annoying, but effective. Lately actors are using the “dramatic mumble” and it makes me want to scream.  I have to watch shows that are “on demand” or TiVO’ed so I can rewind several times and figure out what the actors are saying.

This morning we were watching a show on HBO.  In a very dramatic scene where the mother was explaining to her daughter that she had done stupid things in her life the dialog went like this:
LOW TALK MUMBLING
Hint, the mother had cheated on her husband, Joe, with Ed.
“My lie isn’t as purple as you thin. (long dramatic pause) I’ve made mice steaks. (short dramatic pause) I’m a whore you know, and the moist people end my life ate my children. (Long dramatic pause) I cheetoed honor dead.”
“But doodledolasled?”
After several replays, we finally figured out the dialog:
“My life isn’t as perfect as you think.  I’ve made mistakes.  I adore Joe, and the most important people in my life are my children.  I cheated on your dad.”
“But do you still love Ed?”
It was a very dramatic scene.  The acting was excellent.  Just, to me, the dialog content is important.

Maybe they could provide subtitles.
Posted by joeh at 9:44 PM