Do Not Dare to Think Wrong

Do Not Dare to Think Wrong
a cranky opinion for
CRANKY OPINION SATURDAY
The following is the opinion of a cranky old man.  Opposing opinions are welcome, but please, be nice.  There is no name calling, and that means you, you big stupid-head.
There was a time in our history, the 1950’s, where speech was not protected.  I know little of this time except what I read from many of the oppressed.  It was a time of “Red fear.”  A time where anyone who expressed an opinion other than that of the mainstream-thought-police was labeled a communist.
Anyone in those dark ages who dared think out loud of the possibility of a world where wealth was shared in any way were subject to incarceration at the worst, cold shoulder shunning at best.  Talented people, especially and famously those in the entertainment industry, were blackballed; they could not find work, they could not be hired.  If someone even pointed a finger and claimed you didn’t think correctly, you were ostracized.
Those were scary times.  Times of McCarthyism, times of fear to express an opinion.  It was a time of shame for our country.
Is it so different today?  I will no longer express my political opinion out of fear.  Fear of violence on my person or property.  Fear of being ostracized by neighbors, friends or even family.  Mere mention of a political preference in the wrong place is dangerous.  I have experienced it and it is not nice.  College students are failed for thinking the “wrong way.”  The hate is palpable.  Love trumps hate, it also beats the shit out of people who dare to disagree.
I was never one for bumper stickers or signs on the front lawn, but this last election I saw almost none of these old election standbys.  This last election, people were in fear of expressing a presidential preference.  A bumper sticker for the wrong person on the wrong street might end up in a slashed tire or a broken windshield.  A political sign on a lawn could result in an egg bombed home or worse.  I’ve never before experienced such hate, such fear to express an opinion.  I don't mind if you attack a thought or an idea, but these days people are attacked, not the thought or idea.
Last year my daughter gave me a hat representing a political candidate.  I would not even think of wearing it in public.  Wearing this hat would be asking to have the crap beat out of you for daring to “think wrong.” 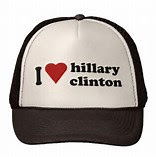 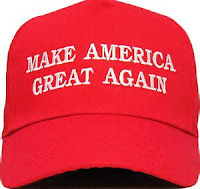 This hat resides on the mantle in my basement next to other hats representing my favorite sports teams.  When we have visitors, I put this hat under another, in order to avoid any potential animosity or repercussions it may engender.
It is silly isn’t it.  I am almost ashamed of myself.  I hide a hat for fear of the reaction it may provoke.  I am actually afraid that friends, even relatives will no longer associate with me if I dare to “think wrong.”
The days of “Red Fear” in the ‘50’s were scary and were wrong.  This country is supposed to be the one place where you are guaranteed the right to “think wrong” without retribution.  I’m not so sure that is true today, so I remain silent.
My silence does not mean I agree with the “correct” thinkers.
The preceding was the opinion of a cranky old man and not necessarily that of management…Mrs. Cranky.
Posted by joeh at 10:08 PM