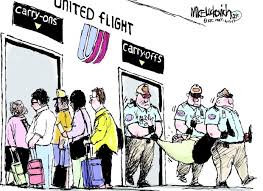 The following is the opinion of a cranky old man who does not know what he is talking about.  Opposing opinions are welcome, but are wrong.  As always, please, no name calling, and that means you, you big stupid-head.

I am outraged by the United Airline ousting of a paid seated passenger this last week.

The situation was the airline needed four seats on an already fully booked flight in order to carry United Employees to cover for an employee shortage at another stop.  Three passengers accepted a United payout, $850 I believe, to voluntarily give up their seat.  No one else was willing to leave.  The airline then randomly picked, by virtue of algorithms (date of purchase, ability to place on another flight, etc.) a passenger who was unwilling to leave.

Airport security was then called and they escorted the passenger off the plane, he pulled away and ran back to his seat.  Security then dragged him off forcibly and in the process, he was injured (a broken nose and lost tooth according to his lawyer.)

This whole scenario is just wrong.

Yes, when you buy a ticket, the small print which you check “I agree to all terms” says the Airline has the right to remove any passenger for just such a situation.

Yes, the Airline was required by FAA rules to carry the backup employees.  If they did not, other flights would be cancelled and this causes a chain reaction of delays all over the country.

No, the United employees did not rough up the passenger, it was airport Homeland Security which was called per regulations in such a situation.

What should be done in these situations?

Since I have absolutely no expertise or FAA protocol knowledge what so ever, I will offer an opinion.

If a seated passenger has to give up a seat, the airline should just keep upping the payout offer until enough volunteers are recruited.  I am pretty sure that once the offer reached $1500, $2000 or more with a promise to have a seat on the next available flight they would eventually get the volunteers they need.

The airline is at fault.

That said, this passenger was also wrong.

We have rules and laws.  If the rules are unfair, you do not deal with them by throwing a tantrum.  If I was on that flight and this passenger acted in the way that he did, and then security just said, “OK, if you’re going to be difficult, you can stay,” I would not be comfortable flying with this passenger.

He acted in a weird fashion, he was clearly out of his nut, and I am a bit tired of the squeaky wheel always getting the grease. You do not throw a tantrum with armed Homeland Security people…these people are serious, they act first and ask questions later, and I am glad they do.  Anyone remember 911?

Airlines: Find a way to avoid these situations at all costs.  Pay whatever it takes to get volunteers to give up their seat.  Playing by the book just knocked 500 million dollars off the value of your company so…Hell, hire a private jet to move your employees if you must.  Have a few at every stop just in case, you’re an airline, hello, have a spare plane around.
Oh, and if you have to bump someone from a flight, do it before you start boarding for Crispy sake!!

Passengers: Do what you are told!  Does it suck? You bet it does, but the airlines, or the FAA cannot allow passengers to make the rules.  Do what you are told and fight later with complaints or law suits if appropriate.  When several large people with guns and official uniforms tell you to get up and get off, you are not going to make that flight.  Let me repeat that, YOU ARE NOT GOING TO BE ON THAT PLANE WHEN IT TAKES OFF…no way, no how, not going to happen, no matter how much you kick and scream like a two-year-old who didn’t get his Cocoa puffs.  So, get the frig off!

Did the Airline miss-handle this situation, why yes, yes they did!

The preceding was the opinion of a cranky old man and not necessarily that of management…Mrs. Cranky.