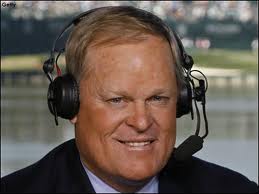 This re-run is from April 2012
I'm not sure if Johnny is announcing this year, I hope not.
(I know, it is a dumb game, no need to tell me...thank you)
I love golf.  I love to play; I love to watch it on TV.  What I don’t love is the stupid golf slang that announcers feel they are required to constantly use.
The MASTERS CHAMPIONSHIP starts thursday.  This is my favorite tournament.  Lots of people watch this event.  People who do not understand golf watch it simply because the venue is incredibly beautiful.  Perhaps this year TV announcers will recognize this fact and explain the game in terms that average people can understand.  Stop the cutesy crap!
PLEASE!
Golfers putt with a putter.  Stop calling it THE FLAT STICK.
The area that golfers want to land their drives is called the fairway.  Stop calling it THE SHORT GRASS.
Sand is in a sand trap, it is not the BEACH.  The grass in the rough is tall, but the rough is not called the tall grass.  It is called the ROUGH.  To play golf in Europe you cross the Atlantic Ocean.  It is not a THE POND.
Golfers start a hole hitting a driver, not THE BIG CLUB.  Errant shots land in the water hazard, not THE DRINK.
The announcer most guilty of abusing golf slang is Johnny Miller.  I play the game and I don’t know what the hell he is talking about most of the time.
I know what a chip is.  I know what a pitch and roll is.  Tell me Johnny, what the hell is a “Chunk and Run?”
“He just needs to feather it here.”  Feather it?  Tell me Johnny, what is feathering it?
“This is a spot where I like to just slow swing it.”  Huh?  What?
“These green are Augusta fast.” OK. I understand that one but then Mr. Miller follows with, “They are 13’s maybe 14’s.” WHAT?  EXPLAIN Johnny EXPLAIN!
Here is a Johnny Miller statement that makes no sense at all.
“Tiger needs a win.  You don’t want to go from no wins to winning a Major, he needs a win” What the frick does that mean.  It almost makes sense until I start to think about it and then….no…It is just a stupid thing to say.
These are more Johnny Miller golf vomitisms I heard this past week:
“That was a little chunky.” (He didn’t hit the ball clean; he hit the ground a bit before he hit the ball.)
“He got a draw with a fade wind; that is juicy there.” (He tried to curve the ball left into a cross wind.  Juicy?... I got nothing.)
“The wind is against him…well it’s a little greasy, but not that bad.” (I have no idea.)
“He is going to want to cozy-it down with an option to go clunk.”(He wants to make sure this putt does not go past the hole but wants to give it a chance to go in.  I know that is stupid but I think that is what he meant.)
I know you understand the game like no one else Johnny, but could you please explain it in English?
Maybe I will have to cozy the volume down with an option to go click.
Posted by joeh at 12:34 AM