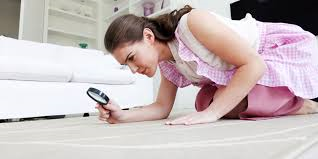 The problem with being a that’s-good-enoughonist is it may not be a fast track to success in life.

The problem with a perfectionist is they are never…ever…happy.
I was married to a perfectionist for many years.  If ever there was a combination destined for failure it would be pairing a that’s-good-enoughonist with a perfectionist.
As a that’s-good-enoughonist I could overlook flaws and imperfections.  As a perfectionist, she could not.  Actually wife #1 was worse than a perfectionist, it is one thing to not overlook a flaw, it is another to take a fine-tooth comb and a magnifying glass and not quit until you find something to complain about.
The first time I knew I was in deep trouble with this conflict of acceptance was when I wall papered a small kitchen in our first apartment.  I don’t think anyone wall papers anymore.  For you young people, wall paper was a paper product with patterns which you stuck on the wall instead of painting.  It used to be popular, but it was a giant pain to apply.  Wall papering was a skill that took much practice and patience.
One of the great difficulties in wall papering was matching the seams of each strip of paper that you applied.  If you had a flower pattern, you needed to match up the correct flowers in the correct pattern.
For this particular job, I was by necessity, a perfectionist.  Anything else in wall papering just looks horrible.  There is no good-enoughonist in matching a wall paper pattern.
The room was tiny, but it still took hours for me to finish…well almost finish.  There was a two-foot by two-foot area between the stove and the wall that I did not paper.  The space between the stove and the wall was maybe three inches.
A perfectionist would have unhooked the stove, pulled it out, and papered the 2x2 area with a perfect matching piece of paper.  A that’s-good-enoughonist would take any old piece of 2x2 paper, apply the glue, reach in and slap the paper in willy-nilly.  The only way to see that the strip did not match the rest of the pattern would be to peek into that 2-3 inch opening with a flashlight and check it.
Who the hell would do that?
Who would see a beautiful job of wall papering and instead of praising their husband for doing a very nice job with a very difficult pattern, would complain and be miserable about a flaw that could only be observed when you peered into a 2-3 inch gap with a flashlight?
“No one will ever in a thousand years ever know the paper does not match in that small crevasse between the stove and the wall!”
“I’ll know it doesn’t match.”
Any question why this relationship did not go the distance?
Posted by joeh at 11:10 PM