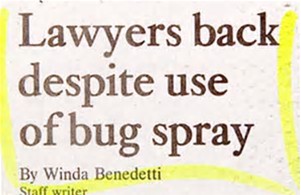 Maybe they should try shark repellant
STUPID HEADLINE SUNDAY (on a Monday)
This week’s stupid headlines and my stupider, sometimes sophomoric comments.
________________________
About 70 employees get sick after health department party – Maybe they should call in the Health Department.
Airbus finalizes deal with Iran for 100 planes – Ok, so Iran gives Airbus 100 planes to finalize the deal, but what is the deal? Who writes these headlines?
Oldest known living gorilla in U.S. turns 60 – Dang, Hulk Hogan is 60 already?
Contents of first discovered Philistine cemetery revealed – Turns out there were mostly a lot of dead Philistines!
Scientists Found Something Surprising Near Uranus – For the love of God, would someone please rename this planet!
Michelle Obama: Barack Obama is the Parent and the American Public Are His Hurt Little Kids – I don’t dislike President Obama, but I had a daddy and he was at least as smart as the President.  Does anyone else find this offensive?  Probably just me.
Couple Finally Gets Married After 41 Years of Dating – And boy are they horny!
NFL security guard fired after apparent sex act during game – A Mr. Castanza was later quoted asking, “Was that wrong? Should I not have done that? If I knew that that sort of thing was frowned upon...”
Your poop can be turned into fuel – But your car will get shitty mileage.
George Washington University Removes U.S. History as a Requirement for History Majors – Big deal, and why would a college named after the guy who invented the peanut be concerned about American History?
Drugged driver leads cops on chase through airport – Why would cops have a drugged driver lead them in a chase, seem like he would only slow them down.
THE FEEL GOOD HEADLINE THIS WEEK:
Black Man Befriending KKK Members Has Led to 200 People Quitting the Organization - Daryl Davis is a black blues musician who has traveled the country for the last 30 years befriending members of the Ku Klux Klan.  This mission is not out of any sort of misplaced empathy with the organization’s racism – the 58-year-old believes that when Klansmen actually sit down and talk with a black man, they will find that their hatred is misplaced – and he’s usually right.
_________________________
Come Back Next Week For More
STUPID HEADLINES!!
Posted by joeh at 11:21 PM