It is time again for 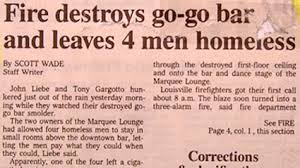 
MLB bans hazing ritual of rookies dressing as women – Can they still dress as women if they want to?


Pastor tells kids waiting to see Santa that he doesn't exist – That is ridiculous, the pastor was right there talking to them, of course he exists.


Professor Bans Students from Using Term ‘Illegal Immigrants’ on Final Exams – In four years of college, I never had the need to use the term Illegal Immigrants...why was a ban needed?
Death row inmate's lawyers say they'd prefer firing squad over lethal injection – I’d rather have a lawyer that tried to get me free, not negotiate how to have me killed.


Md. teen shoots a buck that stormed into his living room and trashed a Christmas tree – Teen was behind the couch, he fired just left of the glowing nose and got him between the eyes.


Woman Farts During Surgery, Setting Fire To Laser In Operating Room – So that’s why they tell you not to eat anything after 11:00.


Dylann Roof trial: Will he get the death penalty? – I am personally against capital punishment, but I would not object if they picked Hannibal Lecter as his cell mate.


Apple owes $2 million for not giving workers meal breaks – If I was paid for all the lunches I ate at my desk while still working I could retire…oh…wait.


FEEL GOOD HEADLINE OF THE WEEK


Quick-thinking 11-year-old boy helps foil girl's kidnapping - At first he thought the man was the girl’s uncle, but quickly noticed something was not right. TJ quickly ran to get some help before chasing the man down.


His quick-thinking helped prevent a 7-year-old girl from being kidnapped, KAUZ reported.


The suspect was Raeshawn Perez, who told police that he wanted to have sex with the young victim before his plans were foiled by the quick-thinking 11-year-old and the neighbors who jumped into action to take him down.


James Ware told reporters that he and other people in the neighborhood were able to track down Perez at a nearby vacant home. TJ was waiting for them.


“He pointed behind the house, and said he went behind the house,” he said. “I pulled into the alley and threw (the car) in park. My wife yelled at him and told him to put the child down. He was about to put her in a window.”


Perez let the girl go as Ware approached him, but took off running. Ware said he was able to catch Perez and hold him down until police showed up.


Come Back Next Week For More