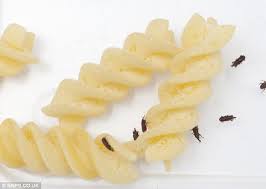 I had a tooth pulled the other day.  It was a molar which had a root canal done years ago, and had a gold cap.  It was loose, got infected and apparently was even cracked so it had to go.
It took only about five minutes to yank after my mouth was numbed up.  It stopped bleeding fairly quickly and hurt, but did not throb.  There was no need for any pain medication of the prescription kind. My mouth was sore and the dentist instructed me to only eat soft food.
Pasta is soft, and I have had very little pasta since I started a low carb, low sugar eating habit over a year ago.  This was the perfect excuse for one of my favorite dishes.  Elbow pasta, butter, two raw eggs that cook onto the drained hot pasta, bacon bits, peas, and stirred in with a few scoops of mushroom soup mix.
Don’t judge, it happens to be delicious.
Mrs. C would not eat this dish, but she goes to work before dinner.
I fried up three strips of bacon, very crispy, microwaved a double handful of frozen peas, and got the pasta water boiling.  I pulled out an unopened box of elbows, and as I poured them into the boiling water dozens of tiny bugs floated to the top.
Crap!
Where do these things come from?  I’ve had them before on pasta boxes that had been opened for some time, not in unopened boxes.  Apparently the larva is in the pasta and if it is old enough they hatch.
Gross.
Even grosser is I had no other pasta that was not over a year old.  There were bugs in every box, linguine, spaghetti, and rigatoni.  I tossed them all, but I was still hungry and had no other soft food, plus I really was looking forward to my pasta, egg, bacon, mushroom soup, and peas meal.
What would our starving frontier relatives of old have done?  That’s right, I skimmed those bugs out of the pot, stirred it up and skimmed some more.  I stirred and skimmed until I saw no more floaters, then I drained the pasta added my ingredients poured a glass of wine and enjoyed my dinner.
I probably did not skim off all the bugs.  I think I did, but…Hey, I was hungry.
A little extra protein never hurt anyone.
Posted by joeh at 10:45 PM