DO YOU BELIEVE IN MIRACLES?

DO YOU BELIEVE IN MIRACLES? 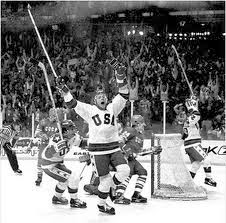 This cranky re-run is from October 2013


Of all the sports in the world, I rank hockey just one notch above curling and synchronized swimming, and yet the greatest sporting event I ever watched was a hockey game.
A lot of you probably saw this same game, and everyone probably knows the story but the interesting fact that many of you may have forgotten or not known is that very few people saw this game live.
In 1980, the US Hockey Team had a solid chance at winning a medal in the Winter Olympics in Lake Placid, New York.  This was before professionals could participate in the Olympics.  The US team consisted of collegiate players.
A medal was in their grasp, the gold was a pipe dream.  To win the gold the US had to get through the Russians.  The Russians, perennial “Amateur” champs.  The Russians, the same team which toyed with the US in an exhibition game 11-1 months earlier.  The cold-war evil empire Russians were considered invincible and had dominated the amateur hockey world since 1954.  Most people believed the Russians could compete in the NHL and dominate.  In fact they were 5-3 in NHL exhibition games.
The US faced the Russians in the semi-final game.  It took place in the afternoon.   In this day and age there is no way they would allow this game to not be played and broadcast in prime time, but it was a different time, not ruled by television.
The game was televised on tape delay at night.  There was no Twitter, no Facebook, no internet, and if you didn’t want to know the outcome before the tape delay was broadcast it was very simple and the media went to great lengths to not broadcast the outcome.  I sat down in front of my TV at 8:00 pm and tuned into watch the impending slaughter.
I don’t remember the exact details, but I believe it was a 2-2 tie after the first period; that in itself was a huge victory.  After the second period the score was 3-2 in favor of the USSR (go ahead and Google it if you want.) Only a one goal deficit at the end of the second period against the Russians was unbelievable.  I still assumed at this point that the Russians would come alive in the third period and blow the US out, but then…
The TV accidently flashed to a live shot of people cheering and dancing in the streets of Lake Placid.
“OMG…did we score a goal and somehow hold on for a tie?”
To tie the Russians would have been incredible; a win never crossed my mind.
In the third period the US did tie the game, and then Mike Eruzione scored what will forever be the most famous goal in US Hockey history to put the US ahead 4-3.
AHEAD!!!
“Damn, maybe we did tie the Russians.”
Even though we were winning, the thought of anything better than a tie still never crossed my mind.
As the period continued I waited for the Russians tying goal.  It never came.  As Al Michaels counted down the final seconds of the game, he yelled that famous call,
“Do you believe in miracles?  YES!!
Many people forget that the US still had one more game to secure the gold medal.  They played Finland 8:00 am the next day, a Saturday morning.  I think all of the USA set their alarms for 8:00 that morning, and watched the still underdog USA team managed to beat Finland to win the gold.
What prompted this memory?
Mrs. Cranky just asked me, “Do the Giants or Jets have a chance to play in the Super Bowl this year?”
Posted by joeh at 11:13 PM