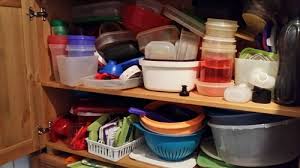 Some of you may be aware that this cranky old man hates Tupperware.  That’s right, I am an Anti-Tupperite.  Mrs. C is a big Tupperware lover.  She is the child of a Tupperware lady.  She believes Tupperware is gold.


Why do I hate Tupperware?


First it is expensive.  Mrs. C claims that it will last forever and if it breaks it will be replaced free of charge.  Ha!  Who would actually return a broken Tupperware top for a free exchange?


Second, matching tops with the bowls is really frustrating.  The bowls are clear, the tops many different colors.  Some tops almost fit some bowls…if you force the issue the tops break.  In over fifty Tupperware years, I do not understand why they do not put a colored stripe on the bowl that matches with the correct top color.


Third, every Tupperware home has a Tupperware cabinet.  Whoa to the poor idiot (me) who opens that cabinet too fast.  I have been bombarded by many a Tupperlanch.


Finally Tupperware must be hand washed.  Some people will tell me that it is dishwasher safe.  I would agree, but Mrs. C is old school and insists that this plastic gold be hand washed.


What brought on this Tupperrant?


I recently broke several Tupper tops.  Mrs. C was very distressed.  She claimed her mother would be rolling in her grave if she knew.


I am now banned from ever using any Tupperware bowl or implement.  I am relegated to using Chinese Tupperware, or store bought fake Tupperware.  I now have my own cabinet with my own fake Tupperware, which by the way I will put in the dishwasher…if it is ruined, I’ll just order some take-out from Ming’s Kitchen to replace it.


What about the broken tops?


Mrs. C called a distributer and had the tops replaced as advertised.  Great deal right? Except that when she picked up the tops, the distributer sold her $150 worth of new Tuppercrap.  Where she is going to put it is not my problem, as long as she keeps it out of my fake Tupperware cabinet.


“Why do you need more Tupperware, why couldn’t you just replace the tops?”


“I needed this stuff, I’ve been meaning to get some new bowls.”


“But there’s only two of us, we eat out half the time.  How many bowls of leftovers do we possible need?”


“What about the new ice cream scoop.  We have a perfectly good scoop and we hardly ever use it except when Spencer is visiting.”


“We need two scoops for Thanksgiving, one for vanilla and one for chocolate.”


“Oh, we don’t want to mix a drop of vanilla with a scoop of chocolate, I know that was all anyone could talk about last Thanksgiving.”