THE GREATEST FIGHT EVER!

THE GREATEST FIGHT EVER!
Saturday night’s fight, Mayweather vs. Pacquiao was the fight of this century.  I didn’t watch it.  I’m just not that into boxing lately.
I do remember the fight of last century.  I suppose there were several, but the one I call the fight of the century was Ali vs. Frazier I.  Actually the fight was billed as Mohammed Ali aka Cassius Clay vs. Joe Frazier.
Cassius Clay was a tremendous fighter and an amazing self promoter.  He was the first great self promoting athlete.  He beat Sonny Liston who was thought to be unbeatable.  He beat him twice to become heavyweight champion.  Clay not only beat Liston, he toyed with him, and he made him look foolish.  Clay then declared himself a Muslim a disciple of Malcolm X.
He changed his name to Mohamed Ali.
As a Muslim, Ali declared he had no beef with the Viet Cong and refused to be drafted into the Army.  He was stripped of his title and did not box for several of his peak years as an athlete.
When Ali was later allowed to fight he defeated a few pretenders and then the fight for the championship was set, he fought Joe Frazier.
Ali, still derisively called Clay by his haters, was a big mouth uppity anti-establishment Negro.  Joe Frazier was the boot licking Uncle Tom Champion.
Frazier was actually far from an Uncle Tom, he was just a fighter.  He was a no nonsense, “here I am coming at you fighter.”  Frazier was tough; he was as tough a fighter as has ever lived.  He cared nothing about politics or the establishment who rooted for him.
Ali was the media darling, adored by the anti-Viet Nam war protesters and by blacks who loved that he was sticking it to the man.
Ali-Frazier was a match pitting perhaps the greatest heavyweight boxer of all time against one of the greatest heavyweight punchers ever.  Both fighters could dish it out, both fighter could take it, though Ali had never actually been hit or tested as he was just that fast in the ring.
There was no pay for view TV in those days.  There was a new technology, “Closed Circuit Broadcast” to movie theaters around the world.  Ali – Frazier was the first big fight in this new venue.
I saw the fight at a local theater in Staten Island, New York.
Along with most of the spectators I expected Ali to easily defeat Frazier.  Frazier appeared clumsy (he wasn’t) and Ali was considered unbeatable, the only question was whether or not he could take a punch as his chin had been untested.
Early in the fight, Ali attempted to intimidate Frazier with his trash talk (Ali invented trash talk) and his foot speed.
“Give it up Joe” he hollered, “You’re boxing God!”
Frazier, a man of few words responded,
“Oh yeah, well God is going to get his ass beat tonight!”
The fight was 15 rounds.  Ali peppered Frazier with jabs and crosses and could not slow him down.  Joe kept coming absorbing everything Ali could throw.  He would pin Ali on the ropes and Ali would hold his arms and yell to the crowd “He ain’t hurtin me!” 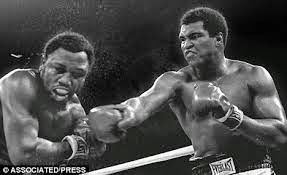 Frazier’s face was puffy and discolored, his eye half closed yet the fight was probably even when in the fifteenth he hit Ali with a tremendous left hook that lifted Ali off his feet and landed him on the mat with a thud.  It was then that Ali proved he could take a punch.  He got up immediately and finished the round trying to knock Joe out.  He did not. 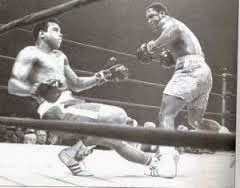 Frazier won on a decision.  They both looked like a losers.  Ali showed class in defeat along with a face that had a melon sized lump and a closed eye.  Both men went to the hospital.
Mayweather  - Pacquiao may have been the fight of this short century, but there may never be a match that has all the ingredients of Ali – Frazier I.  It was a fight with racist and political overtones.  It was a fight that would for once and for all shut up the uppity Negro and restore the country to the comfortable establishment of the white majority.
Instead, Ali won the admiration of many of his haters through his toughness and grace in defeat.  He strengthened his position as a hero to the entire Black Race not just in this country but around the world and he also became a favorite to the many young discontented anti-war whites.
The fight was Liberal vs. Conservative and Conservative won the fight, but Liberal won the war.
Joe Frazier later lost the title to Grill Master George Forman.  Ali defeated Frazier and then beat Forman for the title.  He fought Frazier one more time winning when Frazier could not answer the bell for the fifteenth and final round.  Ali himself admitted he could not go another round.  That fight established both men as the greatest fighters of all time.
Posted by joeh at 9:24 AM