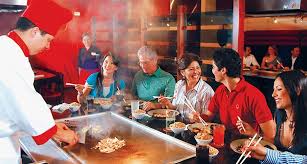 On my birthday, before we left for our Bermuda cruise I went to dinner with the Pa. Cranks, Crankettes and my BIL and SIL.  We went to a local Benihana.  I like the hibachi style Japanese restaurants.  We usually go to a local non-chain restaurant but a Benihana was the most convenient for that night.


These style restaurants are fun.  The food is good and the chef usually puts on a good show.  Usually.  Lately Mrs. C and I seem to get a newbie chef.


For those unfamiliar with these Japanese style restaurants, the chef brings all the food for your order to your table and cooks it on a large very hot grill surrounded by the guests.


Typically the chef comes out, bows, and proceeds to rhythmically clink his knife and fork while he cleans and butters up the grill.  A really good chef twirls and juggles his utensils and puts on a real show.  He generally has a few standard chef tricks.  He builds a volcano out of onion rings, he spins his eggs before breaking the shell, he de-tails the shrimp and flips the tail into his hat, sometimes he will even flip a shrimp tail into a customer’s pocket all while carrying on a chatter of standard jokes.  A good chef is very entertaining.


This chef clinked his knife and fork about as rhythmically as I could do.  There was no juggling or spinning.  He did the volcano thing with one large onion ring and one small ring.  It looked like two onion rings, not a volcano.  There was no egg spinning, and he missed his hat on the shrimp flip.  There were no jokes, just grunting and naming each ingredient as it landed on the grill.


A good chef grills meals for all the guests and times his grilling so all the meals are ready at the same time.  My son was fed and finished before my meal was served.


OK, so the show was lacking, but the food was still good, and we got a little of a show by watching the experienced chef at the next table.  What really was the foil on my fillings was when the bill arrived.


When we go out to dinner I often have a glass of wine (so when I claim to have quit drinking I lie…actually I have quit getting drunk…anyway...) this night since it was my birthday, I had two glasses of pinot grigio.  I was not offered a choice when I ordered so I assume it was the house wine; it did not taste any better than the house wine.  At many restaurant chains a glass of wine is about six bucks.  At a nice restaurant a glass might cost eight dollars…ten if it was a premium brand.  Anything over ten dollars is a real rip off.


I was charged $27 for the two glasses of wine.


I challenged the manager on the cost and he assured me it was correct.  I suggested he might want to list the price or advise his customers that his wine costs almost twice what a glass of wine costs at a similar restaurant.


“How much do you think those cute little soup spoons that you said you liked so much might cost if they were for sale?” 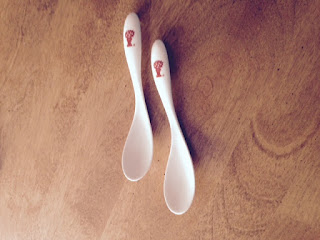