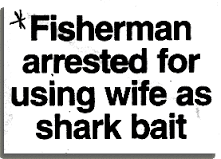 I'm guessing the shark he attracted with this was a divorce lawyer.
STUPID HEADLINE SUNDAY


THERE IS NO FAKE HEADLINE CONTEST THIS WEEK!  But the funniest comment may be awarded a WHOOP-TEE-DOO!


Woman wakes from hysterectomy to find front teeth missing – She shouldn’t have made an appointment with her Grindachologist.


Hitchhiking robot's cross-country trip in US ends prematurely in Philly – Philly is one tough town.


McDonald's has weird burgers with lettuce 'buns'- Lettuce Buns! That was my stripper name.


Florida man arrested after attempting to carjack unmarked police cruiser – Maybe if they would mark the damn things this wouldn’t happen!


Everybody Has A Tattoo, But Nobody Talks About The Side Effects – I know they tend to make moms freak out!


Someone's Pooping In Golf Holes In Norway – They know it’s a man because he doesn’t put the pin back.


North Korea to establish its own time zone next week – Clocks in North Korea will be pushed back to 1950.


Judge Says Man Can Either Get Married Or Go To Jail – Not much different, except for that sleeping with Bubba thing.


Are any of these fake? I don't see directions to choose a fake. I can't operate without reading directions! Where do you get 30 eyeballs? I don't have a clue.

However...that eyeball asshole must have been really rich or really important to have so many people's heads up his ass. And that 95-year-old lobster? Come on! Like he knew where his birth certificate was!

There were several funny comments, but something in my totally inappropriate head believes Stephen deserves a WHOOP-TEE-DOO! Come up and claim your WTD and take a bow.

COME BACK NEXT WEEK FOR MORE


STUPID HEADLINE SUNDAY!!
Posted by joeh at 8:54 AM