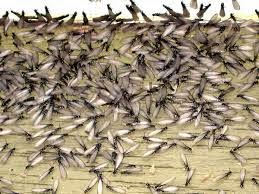 One thing that is consistent about late March and early April weather in the northeast is its inconsistency.  Snow is common.  It is usually a wet, sloppy, and not a whole lot of fun snow.  It is often gone in a day.  For some reason, in the spring it will snow even when the temperature on the ground is above freezing.


It can also get really warm.


The warmest I remember was Easter Sunday 1972.  It was April 2, and the temperature rose to above 90 degrees, and this was before global warming.


On this Easter, my wife and our one year old daughter visited my folks in Maryland.  We returned home to a not so wonderful surprise.  It was hot, but the heat was not the problem, well indirectly I guess it was.  Inside, our home  was crawling with little flying bugs.  They were on the ceiling, they were on the walls.  They were trying to get out.


This was our first house, we had moved in maybe six months earlier.  In the 1970’s termite inspection was not required on the sale of a home.  If it had been, the inspector would have seen hundreds of mud tunnels that came from the outside, ran under the shingles, and were all over and inside the cement crawl space.


We vacuumed the crawling termites up over and over; they kept coming from the crawl space for an hour.  My wife was quite a trooper and though she was upset, she remained relatively calm.


The scariest thing was in a powder room on the lower level of this split level home.  There was a termite mud tunnel heading straight up in the air.  It was heading for the toilet which had a wooden seat.  I’m sure this was a coincidence, if not it is pretty scary how persistent these critters can be.


We called an exterminator, and the house was treated for about $300, cheap by today’s standards, a monthly mortgage payment at the time.  As we were living paycheck to paycheck it was rather painful.


The bad news was the termites were in the house structure.  The good news was these “Jersey” termites swarm every two years, and two years is not long enough for them to do any serious structural damage.  The other good news was that the $300 treatment would kill them all.


I did learn a lot for my $300.  I learned that there are termites all over New Jersey.  If you drive a wooden stake in the ground anywhere in New Jersey, termites will find it. I learned they require moisture and must have contact with the ground, which is why they build tunnels.  Sunlight will kill termites.  They swarm on the first warm day of spring with the intent to form new colonies.  Almost all will die before they find suitable soil and wood for sustenance.


The best way to keep termites out of the house is to not allow any wood to be in contact with soil.  Then you should periodically check for mud tunnels outside on your concrete or stone foundation.  The termites will build these mud tunnels to reach the wood in a structure.


It is a plus that in New Jersey; you can no longer sell a house without an exterminator certifying the dwelling is clear of termites or carpenter ants.


The negative I have found is exterminators will ALWAYS find signs of infestation.  If they so much as see a carpenter ant on the property, or a hunk of termite ridden wood in the yard, they will claim infestation and treat the house for a sizable sum.


There is not a yard in New Jersey that does not at least have a carpenter ant or two crawling around.