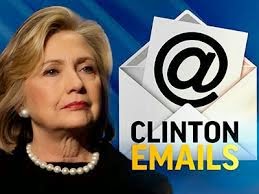 Emily Litella is back, that sweet hard-of-hearing SNL news regular is back with her opinions on:

For those few young'uns not familiar with Emily
https://screen.yahoo.com/weekend-emily-litella-violins-tv-000000080.html 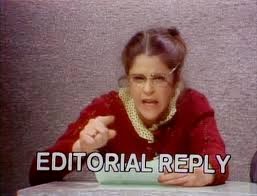 What’s all this fuss about male servers?  Hillary Clinton is a strong powerful woman. She should not be getting her own meals, and laundry.  She is too busy to be running errands.  If Hillary wants her servers to be male what is wrong with that? I’m sure she may get personal with some of her male servers and that’s her business.  I doubt her male servers had anything to do with her performance as Secretary of State, so there shouldn’t be any fuss…


Ah…that is servers for email, Emily; Hillary Clinton has been accused of using her own personal email server for all the business she conducted as Secretary of State.  Many people believe that was breaking the law and is a serious offense for someone who wants to be President of the United States.


Actually, even if it is email servers, who gives a rat’s heiney?


I have to agree with Emily on this one.  Who gives a rat’s ass?  I know, emails are very important; they have been ruled as legal documents and are not to be destroyed for humpty-hump years.  Government officials should save all their emails and they should be accessible whenever anyone wants to examine an issue.


I understand this, but still, to my mind emails do differ from traditional written documents.  As much as everyone is becoming cognizant of their importance and how they are treated legally, emails are often used as casual conversation, thinking out loud and just small talk.  As such I think it is unfair to force all emails to be turned over and analyzed at the drop of a congressional inquiry.


They might as well require all government officials to wear GoPros all the time and capture every meeting and every casual conversation.  I think that would stifle creative thinking and have everyone walking on eggshells at all times.  It would be counterproductive.


People use emails as casual conversation.  They replace cumbersome meetings and face to face discussions with the more economical and productive electronic communication.  When people, government officials as well as business leaders, finally get used to the fact that emails are all saved and can be subpoenaed, their only function will be to set up meetings and other mundane messages.  All communication will go back to face to face, or carefully edited, lawyer cleared written documents.  We gain nothing, and lose an effective economical form of communication.


So yeah, Hillary skirted some rules and maybe broke a law.  I’m just not sure I agree with the law.  I’m not sure emails should be considered public property.  I think in the long run the interpretation of emails being official documents which can be subpoenaed is a very bad concept.


Hillary probably broke the law, and like Emily Litella, I don’t give a rat’s heiney.  If Hillary wants male servers, she should have them.

The following was the opinion of Emily Litella and a cranky old man and is not necessarily that of management…Mrs. Cranky.
Posted by joeh at 7:03 AM