I SHOULDN”T BE ALIVE - a cranky re-run

Another cranky re-run...hey i'm on vacation...well i'm retired so i'm on change of venue.
I SHOULDN”T BE ALIVE 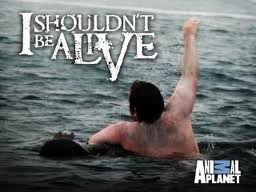 There is a show on Animal Planet “I Shouldn’t be alive” where people get themselves in horrible situations, face death, and at the last minute manage to escape or be rescued.  In the fifties and sixties my friends and I did things which today it would seem a miracle that we made it to retirement.  Here are the things we did as kids for which:
I SHOULDN’T BE ALIVE
As an infant, my parents allowed me to sleep on my stomach.
Two kids and only one bike?  No problem; one kid would just ride on the handlebars.
I regularly ate peanut butter.  I even took PBJ sandwiches to school and killed no one!
I never used a seatbelt in a car before the age of 22.
I once crossed the road and only looked one way.
In the winter we bumper-hitched (grabbed a ride by skiing on your boots behind a car holding on to the bumper.)
I cut through old man McDermott’s back yard.
I rode bikes and skied without a wearing a helmet.
I sailed small boats and water-skied without wearing a life jacket.
I took salt tablets before football practice in 98 degree heat.
We played with BB guns.
I dove in the shallow end of a swimming pool.
I ran with scissors.
The hill we used for Sledding in the winter was on a busy street.
I ate raw eggs.
I struck a match without closing the cover.
I Drumk and droved (hic).
I had unsafe sex….well I would have.
I ran barefoot all summer…Bees? I ain’t afraid of no stinkin bees!
I passed an 18 wheeler truck on the right.
I stood under a tree in a thunderstorm.
I Called Football Coach Khoury “Nemo” (Had to run laps until I dropped, but I did survive.)
I once went swimming 45 minutes after eating.
I once prepared raw chicken and did not wash my hands.
I squirted starter fluid over a lit brbq.
They should do that TV show on my life because clearly;