FISHING WITH FROG - a Cranky re-run 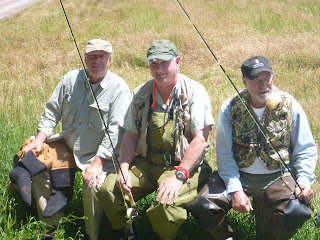 Frog, Marty, Cranky Old Man
It is almost June.  Early June is when my friends Frog (named as he looks like the goggle glasses wearing kid on the little rascals) and Catfish (named because…well it just seemed to fit) take an annual three day fly fishing trip to western Maryland.  I have joined Frog and Catfish three of the last six years.  We have a great time, but as I get older this fly fishing thing gets a lot like work.  I’ve yet to decide if I am going this year, or if I will look for an excuse to take a pass. 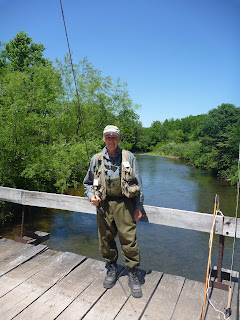 We stay for free on this trip in a nice house on a beautiful lake.  Frog has a sweet deal with some Guy for this house.  Actually it is a friend whose name is “Something or other” Guy.  I don’t know how he does it, but Frog never goes anywhere and pays.  He has a friend in every state in the union.
Of course we never fish on this lake which is noted for its large and small mouth bass.  That would be too easy.  Instead we travel 45 minutes to an hour to fly fish for trout in several different Maryland streams.
I enjoy the outdoors, and the trout streams we fish are beautiful, and relaxing…if it wasn’t for the fishing.  Several factors make this endeavor more chore than pleasure.
Frog, Bill to most people Mr. Douwes to neighborhood six year olds, taught me how to fly fish.  Well…he got me to try.  I have acquired some proficiency at this sport which tops most in its ability to frustrate, but attaching a speck of a fabricated insect to the tiniest line is almost impossible for my tired eyes.  When I lose a “fly”, usually snagged in a tree, I have to whine to Frog like a three year old for him to attach a new fly to my line.
It takes several “false casts” to let out line before dropping the fly gently in a spot certain to hold a fish.  If your timing is off, these false casts succeed only in creating a giant bird’s nest of tangled knotted line.  I spend much of my fishing time sitting on a rock trying to undo these tangles.
Navigating these streams in full wading gear is also difficult.  Walking on slime covered bowling ball like rocks in a fast stream is not really relaxing.
Still, all things considered, I have learned to enjoy this pastime and have even caught an occasional trout.  The reason I hesitate to participate in the annual excursion is…… CATFISH!!
Frog is an avid, accomplished fly fisherman.  Catfish, Roy to most people Mr. Miller to neighborhood six year olds, is a certified fishing lunatic.  Catfish is up at dawn and ready to fish.  We call him FTD, fish till dark.  He will not quit till the fish stop biting, and they never stop biting for Catfish.  He could catch fish in a street puddle.  Frog catches four or five fish on a good day.  I catch two or three on a good weekend.  Catfish catches three or four an hour.
Catfish is always on the move.  “Let’s go upstream; let’s go down stream; I’m going to cross the river; there is a stream a few miles from here we should try……”  I am perfectly happy not catching fish where I am and don’t really want to leave to not catch fish somewhere else.
When I move in a stream, I splash and stir up silt scaring all the smart fish.  I then cast my fly with a loud slap and a tangle where I think a fish might be hiding.  Catfish silently sneaks up on his prey, hides behind a rock and lands his fly quietly as if it just fell from the sky right on top of a clueless trout.
I will fish all day with the same fly.  Frog will make frequent changes from a stash of an assortment of self tied lures.  Catfish also has a stash and makes frequent changes, but will whip out gear and tie a special fly on the spot if he sees a feeding trend.
Frog and Catfish have the fly fishing jargon down to a science.  “Fish on!” Frog will yell when he gets a bite.  “Whatcha got?” Catfish asks.
“Feels like a brownie.”
“Really?  All’s I’ve seen are brookies!”
“Feels like a brown…wait; damn it’s a little rainbow!  I could have sworn it was a brownie.  It fought just like a brownie!”
“What did you catch him with?”
“A mugwig number 8.  I was using a catsinjammer number 4, but I thought I saw something feeding on what looks just like a mugwig!”
“Thanks, I’ll have to tie me one.  Can you loan me some baby skunk tail fur?”
Jeez!
I hook up and I yell, “Got something!”
“What is it?”
“How the fuck should I know?  It’s either a fish or a lively freaking snagged branch.  Wait…damn, it’s a branch.  I could have sworn it was a fish.  It fought like a fish! ”
“What were you using?”
“A fucking dumb foam ant!  What is the difference?”
“Thought so, branches love those foam ants!”
“Fuck you! Freaking wise guys.”
By nine PM I am exhausted, sore and starving.  Even Frog has had enough.  We beg, then drag Catfish away from the stream and head for dinner at Uno’s, the only place still open out in the sticks of western Maryland.
One day of this I can handle, three days I’m not sure.  I think Frog likes my company.  I make him feel real good about his fishing ability.
I’m not sure Catfish even knows I am there.
Posted by joeh at 9:12 AM