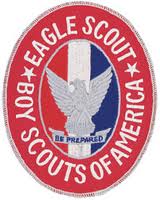 Last Saturday I attended an Eagle Scout ceremony for my friend’s son, Alexander son-of-Frog.  Achieving the status of Eagle Scout is special.  The process of becoming an Eagle Scout is arduous.  Eagle Scouts are special.
There are many stages of scouting to be reached before achieving Eagle Scout status. Each stage requires several specific accomplishments before advancing to the next stage.
I was once a cub scout.  I advanced to the rank of Tiger Cub by learning the scout pledge, salute, and how to properly tie a neck tie.  I dropped out on my attempt at my Wolf badge when I could not make a radio out of a spool of wire and a container of Quaker Oats.
Being able to tie a neck tie was essential to me later on in life.  Being able to build a radio out of wire and a Quaker Oats container probably did not keep me from becoming CEO of my company.  Except that the confidence from learning these tasks might have pushed me to a higher status on the totem pole of life.  I will never know.
Alexander son-of -Frog will know.  The tasks he has completed, the tools he has learned will give him far more than the ability to start a fire with two sticks; they will give him the confidence to try anything, the leadership ability to inspire others to follow, the strength to keep going when the going gets difficult, and the character to look temptation in the eye and turn away from those things that are just not fair or right and gravitate to those things that add to societies’ greater good.
My step-crank is an Eagle Scout.  You do not have to say that he is a good kid.  You do not have to say that he has good values.  You do not have to say that he will not succumb to drugs or gambling or anything that would bring him dishonor.  You only have to say, “He is an Eagle Scout.”
Henry Aaron is an Eagle Scout…Charlie Manson was not.
Neil Armstrong is an Eagle Scout…John Wayne Gacy was not.
Michael Bloomberg is an Eagle Scout...Joel Rifkin was not.
Bill Bradley is an Eagle Scout…Osama Bin Laden was not.
Ross Perot is an Eagle Scout…John Mohammad (The Beltway Sniper) was not.
Gerald Ford was an Eagle Scout…Richard Nixon was not.
Steven Spielberg is an Eagle Scout…Ted Bundy was…OK…bad example but I’m pretty sure he cheated on his good citizenship badge.
The point is Eagle Scouts are groomed for leadership, high standards and success.  I once read that 20% of the CEO’s in this country are Eagle Scouts.
Congratulations Alexander son-of-Frog.  You should be proud. 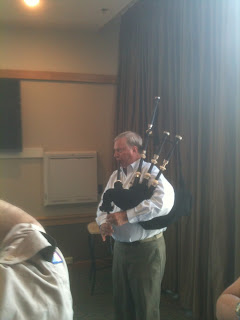 Frog bringing in the Color Guard
“Will Pipe for food” 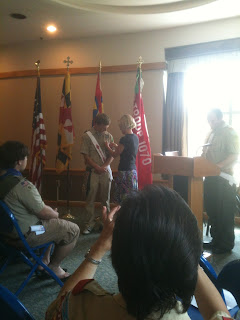 Mrs. Frog presents award to Alexander son-of-Frog
Then she cried…..Moms! 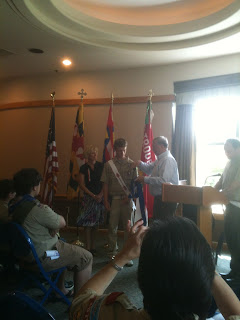 Frog presenting troop scarf to Alexander son-of-Frog
Mrs. Frog cried some more…MOMS!!*
*Pictures by a cranky photographer with a frickin phone.
Posted by joeh at 9:10 AM