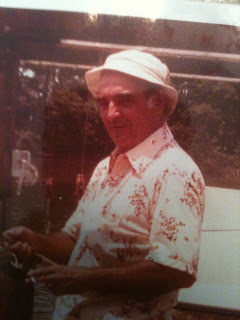 For part I go to http://joeh-crankyoldman.blogspot.com/2012/06/fathers-day-special-part-i.html?utm_source=feedburner&utm_medium=feed&utm_campaign=Feed%3A+blogspot%2FetXBu+%28Cranky+old+man%29
Wonderful as he was, Dad had his human side; and now for the rest of the story.
While he built a wonderful fiberglass boat in our basement, he was caught at the conclusion with a boat that was too big to get up the stairs and out of the house.  We struggled all one morning trying, and then, when Mom announced she was going to the store, a crazed look came into his eye. As soon as she left the house he was at her beautiful oak floors with a rip saw opening a huge hole to the basement.  He fearlessly cut through not only the oak floor, but the supporting beams, and, before the floor collapsed, shored up the beams and framed the cut out section of oak floor to make a trap door.  The boat was then extracted and the trap door fit into place and covered with a rug, all before Mom got back from the store.
But there is more.  After extracting the boat it was towed to Manhasset Bay for its inaugural cruise.  Unfortunately, upon being launched the boat immediately rolled over.  It was top heavy and, while it wouldn’t sink, it wouldn’t stay right side up either.  After a whole year of hard work and the caesarian removal of the boat from the basement you can imagine how distressed Dad was; but not for long.  After a short period of mourning he redesigned the boat, threw out the old molds, built new ones and delivered a new boat by the next racing season.

A cranky aside – Several Years later my brother Jim and I (90% Jim) rebuilt the original boat from dad's design without the extra heavy inner hull.  In our haste the mold was imperfect and we did not have time for a do-over in order to enter the last sailing event of the season.  We fitted out the MOLD with its rough exterior (causing slowing inefficient water flow) and Jim still finished 2nd in a fleet of 45 boats.  That boat was then retired, never to sail again.
It was that boat, his second effort, which my brother Jim sailed to third in the Internationals and to first in the South Jersey championships and which captured the hearts of all who were longing for fast, safe fiberglass boats and the end of more sanding and varnishing than sailing.
I also remember Dad’s human side as a wonderful, loving father.  He knew that some Friday nights when I was out late while in high school that I had been into some beverages that weren’t appropriate.  But he never said anything----just came into the room early Saturday morning and insisted that I get up and come to the basement to work on those blasted boats.  He would then run the rip saw all day and otherwise make as much noise as possible.  Believe me; you didn’t want a hangover at our house, and a couple Saturday mornings like that were all that were needed to get me to behave a little better on Friday nights.
A Cranky aside – I remember the night outs as being on Saturday and it was on those Sundays that Dad got religion and we went to Church…early.  Either way, the lesson was delivered so well that Mr. Cranky did not have his first hangover until I was in college and far from home.
What I remember most, however, was the night I totaled his new 1959 Ford Galaxy.  It was about 2 months old, and I was in my senior year of high school.  He let me use his new car one night and, while tuning the radio, I looked down and drifted through a stop light into a major thoroughfare and was broadsided.  The car was demolished.  While it was being cleared out of the street a policeman took me to a drug store where, shaking with fear and expecting the wrath of God, I called home.  Dad answered, I told him I had been in an accident and was afraid his new car had been totaled.  He asked was I all right, and when I said yes he said: “Fine, that is all that matters.  I will come pick you up.”
That is the last thing he said about that accident.
A Cranky aside – The story I remember is that Chris pulled out as soon as the light turned green and got hit by a car running the red light.  Now the truth is out.  I’m guessing Dad had Chris' back and went along with the cover up story.
I hope this gives you some things to remember about Dad as you reminisce about the family later this month.  I miss him, and all the Hagy’s, and wish I could be with you.
Love,
Chris
Happy Father’s Day to all you great Dads!
Posted by joeh at 10:09 AM