Why Women Are Stupid

This post has nothing to do with women nor do I believe they are stupid...It is just that people don't read posts on Fishing. 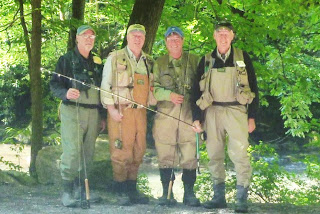 I recently completed another “Fishing with Frog” weekend.  This is an annual fly-fishing trip to several streams in Western Maryland.   Frog is an old college friend and avid fly-fisherman.  Also on the trip was Catfish another college friend and fly-fisherman extraordinaire.
Frog and Catfish differ from me on these trips in that they catch fish.  Apparently it takes more than just throwing a fly in a stream to catch fish.
SEE: “Fishing with Frog” http://joeh-crankyoldman.blogspot.com/2012/06/fishing-with-frog-cranky-re-run.html
A fourth member of this year’s trip was Gilbert, Buddy to most, Mr. Shill to neighborhood six year olds.  Buddy is a novice fly-fisherman.   His lack of experience was clear to me on our first day of fishing.  He expected to catch a fish. 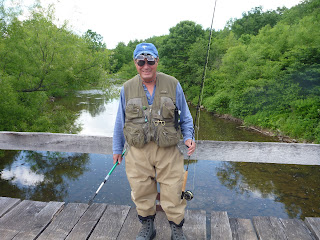 Buddy soon learned what I learned several trips ago:
Fly-fishing is ridiculously difficult and frustrating.
Everything about this sport is aimed at confusing novices.  The equipment is confusing.  Flies, the lures used to catch fish are sold by size; the bigger the size the smaller the fly.  WTF!
The largest retailer of fly-fishing equipment is Orvis.  If you are looking to buy the best equipment you buy Orvis; and yet, every fly-fisherman claims, “Orvis sucks.”  WTF!
All fly-fishermen lie.  If they say the fishing is good….it sucks.  If they say it sucks….the fish are biting.   When they tell you what they are biting on…try something else.  WTF!
Flies are intentionally made so it is almost impossible to tie them on to the fishing line.  Flies are tiny.  The line is attached through a tiny eyehole.  The people that tie flies rub invisible glue over the eyehole so novices will go crazy trying to thread the line through the eyehole.  Experienced fishermen know this and use a tool to open up the eyehole.  They would tell a novice about the glue but it apparently is a tradition to watch and laugh at the newbies difficulty.  WTF!
To further make attaching a fly to the line near impossible, the flies are designed with tiny hairs over the eyehole that divert every attempt at threading the line through the eyehole.  WTF!
Anyone on the stream other than Catfish does not know what the fuck he is doing.  I know this because every time Frog sees another fisherman he tells me, “He doesn’t know what the fuck he is doing.”  WTF!
Hooks will grab and firmly hold onto anything they touch: leaves, twigs, pants, fingers, hats and cheeks (ass and face) but a trout can spit them out with ease.  WTF!
When you approach a stream, always look for a reason that the fish will not bite.
“The water looks too high and fast.”
“The water looks to low and slow.”
“The water is too dirty.”
“The water looks too warm.”
“The water looks way too wet to hold fish.”
WTF!
Armed with this new knowledge about fly-fishing and with some expert coaching from Catfish, Buddy caught several very nice trout and a bunch of small mouth bass over a four day period. 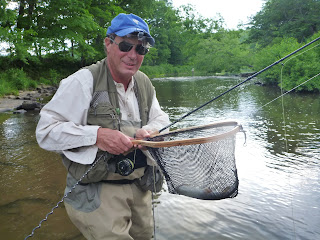 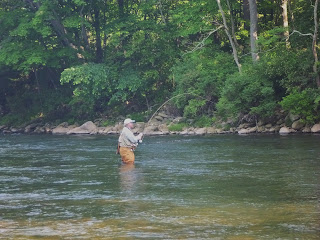 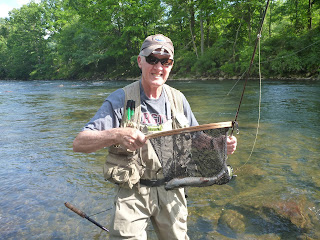 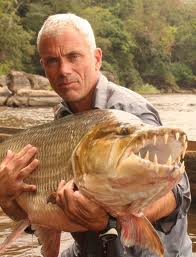 I caught one frickin 12 inch 16 inch trout one hour before the end of the last days fishing, and that was only after Catfish spent several hours showing me where to find the fish and how to make it bite. 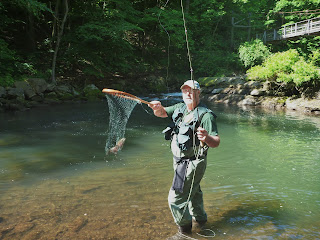 Missing from this year’s trip was another college friend, Marty.  Marty is recovering from a recent operation.  In his absence we made fun of his fishing ability, his groundhog hunting, his wildlife recipes and his politics.   Hey Marty…if you don’t want to be made fun of, get your ass better and be on the next trip! 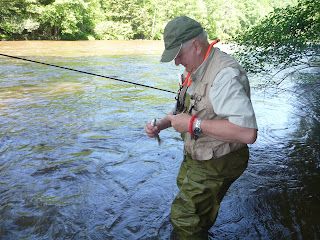 Marty
Seriously, we missed you dude.
Posted by joeh at 11:41 AM