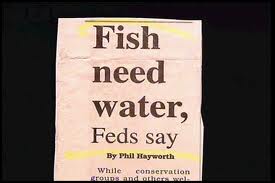 It is Sunday, and even while I am ‘on a change of venue’ (vacation) it is not enough to stop my stupid headlines of the week and my stupider sophomoric and sometimes offensive comments.
California woman gets 4 years in prison for trying to sell infant outside Walmart – Walmart spokesman Dewey Cheatem stated “If we allowed infant sales outside the store, who would buy our infants?”
Professor fired after expressing climate change skepticism – President of Lemming U claimed professor was fired for failing to walk in lock-step with other professors.  The President stated, “If we allow free thinking, students will be confused.  What is next, the world is round?”
Rielle Hunter describes sex with John Edwards; calls his deceased wife 'witch on wheels'- She must have been really mean when she was still alive.
White House denies Fast and Furious ‘cover up’ – The President’s advisors assured the press that “There has been no fast and furious cover up.  Any cover up has been carefully planned and executed.”
Ohio man was making meth inside Walmart, police say – Police also claim the man wath trying to thteal lotth of thtuff and refuthed to clean up hith meth.
New Jersey woman hit with baseball sues Little League player – Woman shocked and surprised that an 11 year-old could overthrow a player!  Maybe she shouldn’t set up a picnic directly behind players warming up.  The woman is also suing the LL for serving hot coffee, “Who knew it would burn if spilled?” and the weatherman for her severe case of sunburn, “He said it would be cloudy!”

Review: Honest Abe has an ax to grind in 'Abraham Lincoln: Vampire Hunter' – I guess we won’t be seeing the sequel “Abraham Lincoln: The Zombies are Coming.”
Bullies Apologize to Karen Klein, but She Wasn’t Doing Her Job – Well I wouldn’t say this…but she has a point.   A bus monitor is supposed to control the little bastards, not sit and take abuse.
Jogger targeted by teens turns out to be Kung Fu expert – Oh I LOVE this one.  Two teens groped a jogger in a Vancouver, Washington State park.  The jogger Pricilla Dang had studied Kung Fu for 18 years at a martial arts school owned by her family.   OOPS!!

Wales 'psychic' guilty of tricking young women into sex acts – These two young women who committed lewd sex acts to ‘increase their spiritual powers’ for FOUR YEARS just might not be the brightest bulbs in the lamp.
Tune next week for more
STUPID HEADLINES OF THE WEEK
Posted by joeh at 9:46 AM