Late last night I was surfing through the TV channels and I ran across the 1971 made for TV movie “Brian’s Song.”  This was one of the first and one of the best “Made for TV” movies.  I had not seen it in twenty years.
Brian Piccolo was a star college (Wake Forest) running back, who though he led the nation in rushing yards and scoring in 1964 was an undrafted free agent for the Chicago Bears NFL football team.  He made the team in 1965 as a “Taxi squad” or practice team member that did not suit up for the games.  He later became the backup to Gale Sayers, who was probably one of the top five best running backs ever to play in the NFL. 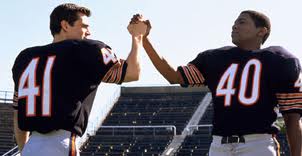 Brian Piccolo was white, Gale Sayers was black.  In 1965 the Chicago Bears integrated travel roommates.  Piccolo and Sayers were the first NFL black/white players to room together.  In this day and age, that may not seem like a big deal; in 1965 it was a very big deal.  Maybe it was not Jackie Robinson big, but it was big.

To put race in perspective, in 1963 the University of Maryland was the first school in the ACC to have a black football player on its roster.

To put Brian Piccolo’s character in perspective, when Maryland came to Wake Forest to play in 1963 the atmosphere was extremely hostile towards the lone black player in the ACC, Darryl Hill.  Before the kick-off, Brian Piccolo ran to the Maryland bench, shook Hill’s hand, put his arm around him and waved to the crowd.  This simple but bold gesture silenced the crowd.

The whole gist of the movie “Brian’s Song” was that two men, competitors for the same job, grew to respect and in a brother kind of way love each other.  Race was never an issue in their relationship.

In one of the key scenes in the movie, Piccolo is trying to push Sayers into training hard to overcome a knee injury.  In his attempt to get Sayers angry and complete an extra set of leg lifts Piccolo calls Sayers a “Chicken Nigger.”

The use of “Nigger” was so out of character for Brian Piccolo, so out of character to their friendship, so obviously a psychological ploy, that Gale Sayers simply broke out laughing.  Sayers’ wife hearing the commotion ran to the workout room asking what’s going on.  Gale Sayers could barely blurt out, “Brian just called me a nigger!” All three then doubled up in laughter.  It was a humorous and touching moment in the movie, demonstrating just how close these two friends were.

In 1971 this scene was shown intact.  In the version I saw last night, Brian Piccolo calls Gale Sayers a “Chicken boop boop.”  Gale Sayers doubled in laughter when he told his wife “Brian just called me a boop boop.”  Somehow the scene and the movie lost something with the new dialog.

When will we grow up?  When will people recognize when “nigger” is mean and ugly, and when it is used as a term of friendship?

My son will call me a fat old bald man, and I love that he can call me that.

Call a stranger a dumb shit, and prepare for battle.  Call a buddy a dumb shit and he will say fuck you and buy you a beer.

I may call my Irish friends “Mick”.  I might call an Italian friend a “Wop.”  I would not call a black friend “nigger” unless he called me “honkey” first.

I’ll know that race is no longer an issue in this country, when calling a black man a “nigger” is so ludicrous that it can only be taken as a joke.

In the mean time, I think “boop boop” will always be offensive.
Posted by joeh at 10:06 AM