THE OBJECT OF THE GAME

THE OBJECT OF THE GAME 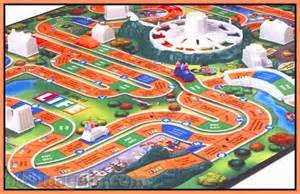 This week the way-back machine goes to May 2015
I learned something today while minding my littlest Crankette.  Connor, the almost five year old, shamed me into playing some games with him.


“Why you always playin on the puter?”


Connor pulled out some games.  We first played “Connect Four” an interesting kind of fancy tic tac toe game.  I was very competitive and won two in a row, but I didn’t rub it in and actually let him think each game was a tie.  We then switched to a different game and this is where Conor taught me something.


We played “Don't Break The Ice."  In this game you build an ice skating rink out of little plastic blocks.  When that is done, you take turns knocking out the blocks of ice.  Eventually when you knock out one block the whole thing comes down along with a little skater dude.  The winner is the one who doesn’t knock down the skater dude. 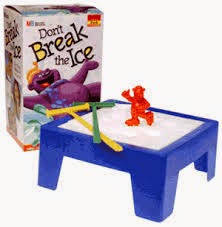 
Building the rink takes longer then knocking it down.  As we were putting it together I had no idea what the game was about. I asked Connor as we locked in these pieces of “ice”,


Now I am not a big believer in games where everyone wins and no one keeps score.  I am not an advocate of “Everyone gets a trophy” and I was never one for believing in that old saw “Out of the mouths of babes.” However Connor hit me with a concept that only an almost five year old could deliver.


“This is not a winning game, this is a having fun game.”


I believe in competition. Winning can be important, but there is nothing wrong, especially when you are almost five, with just having fun.


I will never be a professional golfer, not even on the senior circuit.  I will never be one of the best bowlers in my league.  I will never write a bestselling book or even be published.  I will never be able to play guitar well enough to perform to an audience.  There is nothing at this stage of my life where I will ever be immensely successful.  Just like an almost five year old that is still too small to expect to win; I am past the age of winning.


So now when I miss a short putt, blow an easy spare, write a mediocre blog post, or just cannot put together a clean guitar chord progression I will remember my almost five year olds words of wisdom and not be frustrated.  Instead I will remember that the game of life ultimately “Is not a winning game, it is a having fun game.”
Posted by joeh at 12:09 AM
Posted by joeh at 10:40 PM