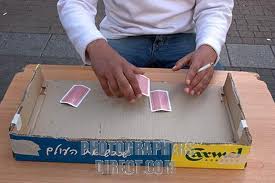 "One of these days in your travels, a guy is going to show you a brand-new deck of cards on which the seal is not yet broken. Then this guy is going to offer to bet you that he can make the jack of spades jump out of this brand-new deck of cards and squirt cider in your ear. But, son, do not accept this bet, because as sure as you stand there, you're going to wind up with an ear full of cider."
Sky Masterson - Guys and Dolls

This cranky re-run is from October 2012


From the early seventies through the early nineties New York City was slowly turning into a cesspool.  There were garbage strikes stinking up the streets.  Transit strikes clogged the streets.  Homeless people slept on the streets, beggars stopped you on the street and crime made the streets unsafe.  You could not stop your car without being strong-armed into giving up fifty cents to have your clean windshield slopped with a dirty sponge by an even dirtier scary looking “entrepreneur.”


On every corner of the city, if there were tourists, there was a three- card-monte game.


Three-card-monte consisted of a dealer, three cards two black plus a red queen, and several shills.  The dealer moved the cards back and forth on a cardboard box and challenged anyone in the crowd to guess where the red queen was.  This operation was usually watched by a small crowd of New Yorkers who knew better than to guess at the red queen, and one or two tourists who were the targets of the scheme.


Guessing the queen seemed easy.  The shills almost never missed, and they won ten dollar bet after ten dollar bet.  The tourists eventually could not turn down this easy money.


The tourists always lost.  How the dealers could hide the queen when they wanted I don’t know, but it was fascinating to watch.
http://www.youtube.com/watch?v=o2kO_5cNF5k


No one dared warn the “rubes” as some in the crowd were part of the game, and were quite capable of teaching squealers a lesson.


The dealers were very good.  I once watched one “accidently” bend the corner of the red queen.  The shills winked at the crowd as they put down a ten spot on the bent card and won three times in a row.  Finally a tourist could not resist making easy money against the clueless dealer.  He stepped up, pulled out a ten dollar bill, pointed to the bent card and called out “This one.”


As I watched, I knew what was going to happen, even though I don’t know how it would be done.  The dealer looked at the tourist and asked, “Are you sure, how about making it twenty.”


The tourist produced another ten and the dealer turned over the card with the bent corner, the five of spades.


These guys were good.


I only saw a dealer lose to a tourist once.  He was dealing for a shill when a tourist slammed down a twenty and insisted it was his bet.  The dealer turned over the red queen, lost the bet and gave the tourist the forty dollars.


Suddenly someone in the crowd blew a whistle, flashed a badge and yelled “Police!”  The undercover cop demanded the money from the tourist as evidence, handcuffed the dealer and led him away from the crowd.  When the “cop” and the dealer were about thirty yards from the disbelieving crowd, the cop let go of the cuffs and ran up the street while the dealer ran the opposite way.


These guys were so good that even when they lost, they won!


Along with strikers, beggars, homeless, and criminals the three-card-monte game also became history.


I never missed the strikes, beggars, homeless or the crooks, but I kinda missed watching the dealers beat the tourists out of their money.