HAS HALLOWEEN CHANGED, OR IS IT JUST MY NEIGHBORHOOD?

HAS HALLOWEEN CHANGED, OR IS IT JUST MY NEIGHBORHOOD? 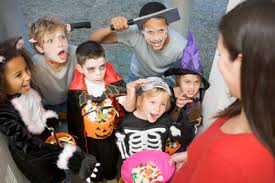 I remember Halloween as being a neighborhood celebration.  The trick or treating started around dusk, with little ones making the rounds with their parents.  After dark, the bigger kids age eight to twelve came out.  After nine o’clock the oldest kids, the teenagers, made the rounds.  By ten it was over.


If you could not be home for the trick or treaters, you left a big basket of candy out and candy was taken on the honor system.  When you came home there was still candy in the basket.


The first round was taken up with talking to the parents (all from the immediate neighborhood) and guessing what each child was dressed as and which child was which.   Guessing the costumes was easy as the parents would mouth the answer if it was not obvious.  You always guessed the wrong child in each costume, no matter how obvious.  The little ones loved that you knew their costume and loved even more that you didn’t know who they were.  The little ones practically squealed “Trick or treat” with delight when you opened the door.


The second round of costumers answered with a more sedate “Trick or treat.”  They answered a few question but were intent on moving on to the next house as quickly as possible…collecting the most candy was a contest.  Whereas the little treater’s costumes were mostly store bought costumes of ghosts, witches, skeletons, or Disney characters, the second round of kids had homemade outfits.  They were football players, cheerleaders, hoboes or pirates.


The final round of kids, the teens, often had no costume at all.  Maybe a funny hat, or a store bought mask of the current President, but that was usually tilted up on the top of their head.  They often just held out there bag and said nothing…too cool to say “trick or treat” young enough to want free candy.

I usually busted these kid’s chops.


“Thank you!”  Then I would hand over the candy.


By nine thirty it was lights out and candy in.  Late comers would not have their ring answered.  Even without the treat, I was never tricked.


These days, the kids come around right after school.  Parents accompany all but the teens.  They hang by the street cell phones ready to call 9-1-1 because they assume every home is occupied by a potential child predator.  I seldom know anyone that comes to the door.  The costumes are always store bought, and the kids seldom say “Trick or treat” even when prompted.  They just stick out their bag and collect the candy.  Sometimes they say “thank you” sometimes they grumble that you did not give them the good candy.


The costume parade ends around eight, except for a few delinquents that ring the bell at ten even thought the lights are all out.


If you leave your car out, the windows will be soaped and there is usually some toilet paper thrown.  Sometimes the little assholes toss eggs at the house.


Today if you leave a basket of candy out while you are away for an hour, it will be empty when you come home…you are lucky if they leave the basket.


I remember when Halloween was fun.  It was fun as a trick or treater, and it was fun answering the door.


These days Halloween is more like a holdup, no joy, no imagination, no neighborhood party, just give me stuff because you are just supposed to give out stuff…and it better be good!


Has Halloween changed, or is it just my neighborhood?
Posted by joeh at 12:27 AM