I AM TOO OLD FOR THIS!

I AM TOO OLD FOR THIS! 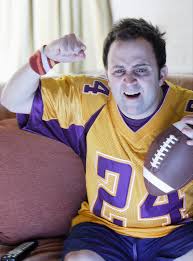 Not the real Cranky...stunt Cranky
I used to be a sports fanatic.  If the Yankees lost in a post season game I would be in a funk for days.  If the Giants and Jets both lost on the same Sunday, I would feel bad for a week.  When my older sons played high school and college football my heart would be in my mouth for every play.  (Sorry Mary Beth, I didn’t see your tennis matches, I was at work.  I did sit through some wicked cold softball games.)


Lately, I root for my teams, but if they lose I don’t take it badly…at least not for very long.  Except for when my son is playing.


My son is in Massachusetts, or as I call it the state with the missing “R.” (Think Paak yaah caah.)  I live six hours away.  It is a major event to see him play in a game.  Mostly I have to “watch” on my computer.  There is a site that updates the score as the game is played.  It is usually about 45 minutes behind.


On Friday nights I am glued to the computer.  Every ten minutes I go to the web site, refresh, and hope to see something good happen.  Several hours after the game there is another web site that allows me to see a replay of the game.


This was a tough one, and now I had to wait several hours for the game to be available in replay.  Spencer plays almost exclusively on defense as a cornerback. With the team giving up 35 points there was a good chance he did not have a good game.


It turns out he played very well.  All the points against them came on the other side or up the middle.  Spencer pretty much bottled up runs to his side, and there was very little passing.  He had ten tackles, five where he stopped the runner in his tracks and two shoe string lunges that stopped big gainers.


In the fourth quarter with the clock running down, NA intercepted a tipped pass.  I was curious how NA would score their last TD, and with Spencer on the bench I could at least relax.


On fourth and ten, the NA quarterback dropped back to throw and just before he got clobbered let go a beautiful pass.  The receiver, five yards ahead of two defenders, made a nice over the shoulder catch without breaking stride and galloped another forty yards to complete a 70 yard touchdown.


Who made the catch?  That gait looked familiar.  I ran it back.  The receiver wore white gloves.  Spencer wears white gloves.  The number was blurred…1 something.  Spencer is number 18.  Run it again…stop…wait…run it…stop…NO SHIT!  Number 18.  Spencer was in on a rare offensive play and he made the touchdown catch that almost won the game…almost…on the extra point they went for two and were stopped.
Spencer's catch.
Picture quality is not too good.
﻿
My son did not get hurt. CHECK


He did not make any mistakes. CHECK


The team lost a heartbreaker. No check


He made the touchdown catch that gave them a chance to win.  Almost check


Dad did not get to sleep until 4 am.


Next week we are driving north to watch his game from the stands.


I am getting too old for this!*

*It gets worse, I just checked the newspaper account of the game, and a backup QB whose number is not on the roster was incorrectly given credit for Spencer's catch.  ARRRRGH!!
Posted by joeh at 12:11 AM