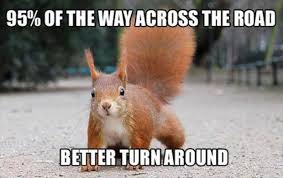 
Eventually most bird lovers grudgingly become squirrel lovers or at least squirrel appreciators.  Their skills, their tenacity, their acrobatics become part of the bird watching experience.  Every bird watcher will tell you that squirrels are very smart.


Then why, I ask, can’t squirrels learn to cross a road?


I almost ran over a squirrel today.  He scampered across the road right in front of me.  He waited to cross until I was in his range and then he shot across.  He could have made it too, but just as he was almost clear of my front wheels, he stopped dead waiting to be stopped dead.  I was too quick for him this time.  I have run over squirrels in the past, I was ready for him to stop and disaster was averted.


So the question is, how is it a creature can be so clever, so inventive, and so skillfully able to circumvent every obstacle imaginable to find his way to an easy meal,  yet he is unable to cross a road?


Apparently the squirrels DNA has adapted to finding food over millions of years .  His existence pretty much demands that the squirrel be good at finding food.  The car and roads, are pretty new on the evolutionary scale.  Except for the last one-hundred years or so, the ability to cross a road has not been much of a factor in the survival of the squirrel species.  From the many carcasses I see along the road, squirrels are not particularly fast learners.


Fortunately for the squirrel many of their other natural predators, particularly in rural heavily road traveled areas, have been decimated, so the car is the squirrels main enemy.  Perhaps after a few more decades of the evolutionary process squirrels will learn that the best way to avoid their new enemy is to scamper like hell, not stop squat and freeze.  The stop, squat and freeze helps them hide from their traditional predators.  This tactic puts them in position to dart in a different direction to avoid capture; it is a very bad defense against several thousand pounds of fast moving steel.


Until new instincts are developed through the survival of the fittest process, it is incumbent on squirrel lovers to be prepared to stop short.*


In the mean time, for us bird lovers, at least the buzzards are thriving.

*Val isn't the only one that can slip in a Seinfeld reference.
Posted by joeh at 1:01 AM