I MUST BE GETTING OLD - a cranky re-run 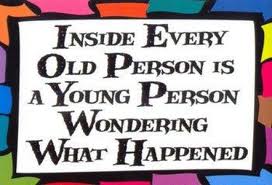 This week's re-run is from September 2012

They say 60 is the new fifty. Then fifty used to be fricking old. I’m sixty-six and without looking in the mirror there are many signs that I am getting old:

I used to think about sex every 10 minutes; now I have to be reminded once a week.

I used to root for the Yankees as if my life depended on it; now I think, “Wouldn’t it be nice if the Orioles won for a change.” (I KNOW!)

I used to play and practice golf at every chance I had; now it’s “maybe tomorrow.”

I used to want a fast boat, a sports car, a big house, and a ton of money; now I think all of that would involve a lot of work.

I used to want to spend more time with my kids; now an hour with a grandchild will do.

I used to wake up raring to go; now, I wake up needing to go.

I used to think new stuff was really cool; now new stuff pisses me off.

I used to get all riled up over politics; now I figure it’s someone else’s problem.

I used to bowl a lot and I hated the 10 pin; OK that hasn’t changed.

I used to think 21 was young; now a young person is anyone under 45.

I think that Meryl Streep is hot; while Lindsey Lohan is a snot.

I used to invest based on potential for big gains; now high interest rates and big dividends get me excited.

Everywhere I go I see buildings that “Used to be” something else.

When they play “Oldies but Goodies” I’ve never heard of them.

The last thing that makes me positive that I am getting old is….ah…I’ll get back to you on that one.
Posted by joeh at 9:16 AM