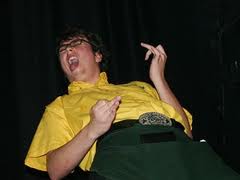 This cranky re-run is from September 2012

Every douchebag rock star wannabe (myself included) has spent some mirror time acting like they could play guitar in a band. It is such a common practice that it was given a name, playing “Air Guitar.”

At some point it became acceptable for these idiots to “play” air guitar in public (I draw the line at mirror time.) Somewhere along the line some jerk-weeds even got credit for being good at Air Guitar.

Did you know that there are actually “Air Guitar” contests? Several weeks ago the seventeenth “Air Guitar” World Championships were held in Finland.

Congratulations Justin "Nordic Thunder" Howard from the US, you are the best in the world at pretending you have any talent at playing a make believe musical instrument. How many years have you fake practice playing a non-existent instrument Justin? Did you take lessons or are you just a natural at pretending? How much did it cost to fly to Finland to compete in a make believe talent?

Maybe you could have spent the money actually learning how to do something for real!

I bet I could compete in some world championships:

Where is this years “Fake Hitting the Crap out of a Golf Ball” world championship being held?

I know I could bowl 300 every time in “Air Bowling.” Is there a world championship for this talent?

I’ll bet I could very convincingly run the billiard table all day long. Where is this year’s “Air Billiards” being held?

I could do it all, “Air Piano,” “Air Skeet Shooting,” “Air Boxing,” “Air Drumming,” “Air Politics,” I could even fake read a non-book faster than anyone!

Come on! The only thing more pathetic than someone competing in “Air Guitar” is the people that watch and vote for the best asshole at acting like he has any talent or charisma.

Anyone involved in this sham is an “Air-head.”

Or is that a different contest involving “Air Sluts?”
Posted by joeh at 7:21 AM