WHO TO VOTE FOR?

WHO TO VOTE FOR? 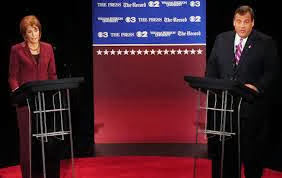 Today I vote for my candidate for Governor of New Jersey.  I do not know how to vote.  I have not done much research, so I must rely on what I hear in campaign ads.


I kind of like our Current Governor Christie.  Seems like he has done a good job the last four years, and he worked real hard during Super-storm Sandy.  I think I will vote for him.


Then according to Barbara Buono, Christie really just wants to be President, not Governor.  I don’t like that.  Maybe I’ll vote for Buono.


But according to the Christie campaign, Barbra Buono wants to tax rich people and give the money to lazy kids that still live with their parents.  I don’t like that…guess I’ll vote for Christie.


What…Buono favors giving money out on the street to anyone that can spell their name?  Christie sided with the Tea Party during the shutdown?  Buono rubber stamps whatever Obama wants?  Christie wants poor people to not get health care?  Buono favors death panels for old people?  Christie shoots puppies? Barbra Buono picks her nose?  Christie said immigrants have BO? Buono eats children?   HELP!!


Now I hear Buono wants to tax feet; but Christie wants to fire anyone in Government that isn’t a Republican!


Is it true that Barbra Buono used to be a man and now has seven illegitimate children?  Was Chris Christie really caught in a diaper with a prostitute?


My head is spinning; I just do not know how to vote.  I guess I just have to ignore all these campaign claims and insinuations.  I don’t know what is true so I will vote with the only information I know for sure.