It is a rare day indeed when I have no opinions, but instead of an opinion on Cranky Opinion Saturday, I submit this reminiscence. 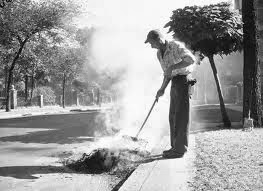 In the good old days, back when air pollution wasn’t a concern, when global warming was not yet conceived of, and playing with fire was a childhood rite of passage, the Fall meant burning leaves.


We did not have leaf blowers which would have been fun.  We had rakes, and for manpower, dad had sons. My brothers and I were responsible for the leaf raking.  It was a lot of work, but we didn’t mind because we also got to burn them.


We did not recycle the leaves.  We did not bag them (the biggest pain in the ass known to man) we dragged them to the street and set them on fire.


Ahh how I loved the sweet smell of burning, smoldering leaves in the Fall.  The leaf burning ritual made the hard work of raking and sweeping a chore we almost enjoyed.


There were some drawbacks to the leaf burning.  One fall weekend after a rainstorm, the leaves did not want to burn.  I suppose we could have waited a few days for them to dry out, but my oldest brother, Jim, was too resourceful for that.


My brother was no dope; he knew putting a match to gasoline might be a little dangerous.  Jim positioned me ten yards away as he moved just several paces back from the leaves.  With one flick he drove a match against the match pack abrasive strip and sent that tiny flaming torch toward the gasoline soaked pile of leaves.


The flaming match never reached the leaves.  My brother, a future physicist, failed to take gas fumes into account.  The fumes from two gallons of gas soaked into wet leaves apparently reached a tiny bit less than several paces.  The resulting explosion was instant.  It knocked Jim onto his back and slightly singed his eyebrows.


Damn that was cool!


Several years later our town put a halt to the Fall leaf burning ritual, and most towns in the state followed.  The leaf burning ban wasn’t from an air pollution issue, or global warming concerns; no, it was a safety issue.  Almost everyone waited for the weekend to burn the leaves, and a large bonfire in front of every quarter acre lot on the street created a visibility problem.  It took several car accidents from vehicles traveling blindly through smoke at about three miles an hour and a small child almost being run over to convince our town’s leaders that the sweet smell of burning leaves and the convenience of no bagging was not worth the residents safety.


The lawmakers were right of course, and the new ritual of leaf bagging and recycling is a good thing.  Still I miss those days of innocence when we did not worry about polluting our lungs, heating our planet or blowing ourselves up.


It doesn’t quite seem like Fall without the smell of burning leaves.
Posted by joeh at 8:36 AM