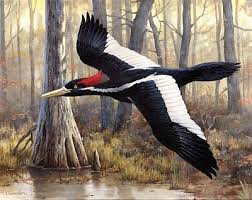 A couple of months ago, Frog (bfff - best friend from forever) lent me a book.  Frog knows I am an admirer of birds, something I inherited years ago from my mom.  I am not a “Birder” or even an amateur bird watcher.  I recognize a few species, more probably than most people, but I am really mostly just an admirer of birds.  With this in mind, Frog recommended and lent a book to me.


Hot on the trail of the Ivory-billed Woodpecker


Among his many occupations, Frog used to be a high school teacher, and he currently teaches an occasional course at a local college.  When a college professor lends you a book, it is not just a book, it is an assignment.  I had to read this book, and I expect to be quizzed on it.


The book is not an easy, casual read.  It is not James Patterson or Dean Koontz, the only authors I’ve read in the last three years (Except for the NYT’s best seller “King Peggy” written by my cousin Eleanor Herman…plug plug.) Frog told me I would like it and so it became a must read.


I have to say, he was right.  Although a bit dry, it is a fascinating read.


The grail bird is the Ivory-billed Woodpecker.  It is the largest of all North American woodpeckers.  It has also been considered extinct by most ornithologists for over forty years. The book recounts the efforts of many bird enthusiast and experts in finding and proving the existence of the Ivory-bill.


The Ivory-bill requires a very specific habitat once found in the south east United States.  It lives in swamps with large old growth Cyprus trees.  These trees, once over one hundred feet high and nine feet around have all but been eradicated by the saws and axes of loggers.  With almost no adequate habitat left, the Ivory-bill has also disappeared; it was last documented to scientist’s satisfaction in 1967.


The author recounts his and others search for this elusive bird, intent to prove its existence so that steps can be taken to preserve habitat and protect the species.


The searchers encounter many difficulties and hardships in their bird tracking.  Perhaps the most interesting problem they encountered was in proving their sightings (which are still not confirmed and fully accepted.)  If their proof of the bird’s existence were not absolutely undeniable, they would be branded as hacks much like those who are out to prove the existence of Bigfoot.  If they find conclusive evidence of the bird, they have to be careful to not give away its location to the wrong people.   Birders are enthusiastic and relentless.  Hordes of avid birders out to add the near extinct Ivory-bill to their personal tally of confirmed species sighted might swarm upon the sighting area disturbing and threatening the existence of the bird they want to protect.


A thought that struck me in reading this book is how much money and time was spent to confirm the existence of a bird that by its very habitat would be seen by only the most extreme and avid birder or scientist.  Suppose it is not extinct, how much effort should be expended to assure its continued existence?   Will we spend millions of dollars to buy up land and keep it pristine and untouched so a couple of birding nuts might add the bird to their sightings?  Will we approve large grants to scientists to research the bird’s habits?  Should we pay for Park Rangers to patrol the area and keep out crowds or even worse, poachers?


If the Ivory-bill Woodpecker does exist, how does that enrich anyone’s life?  Shouldn’t the money and time used to find and then preserve this illusive bird be better spent feeding the poor, sheltering the homeless or curing cancer?


Perhaps; but that is what makes our species special.  We are concerned with our environment.  While some disturb it, others seek to restore it.  No other species cares about the environment around them.   When the balance of nature changes, a dominant species will prevail over all others; often to its own detriment.


Humans are often responsible for altering the balance of nature.  Sometimes we change it irrevocably.  Sometimes we recognize our opulence and attempt to correct our ways.