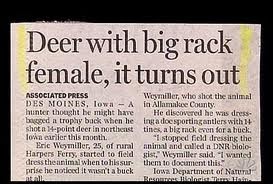 Clearly this should have read Dear
STUPID HEADLINE SUNDAY

White Republican wins Houston election with campaign that implied he's black – “Yo yo yo…I never say I be black.”


Factory fire causes nationwide knish shortage – Oh  kno! I have  knothing  to knosh on without a knish!


Boston bombing suspect wants to lift prison restrictions – Yeah well, we kinda WANTED him to NOT BLOW PEOPLE UP!


Bill Maher tells Boston: 'Your city was not leveled by Godzilla' – Comedian points out to the world that there have been bigger tragedies than the Boston Marathon bombing.  Thank you Bill; and your point is?


Iran's culture minister defends Facebook, says it's not a 'criminal application' – “Chopping off heads of infidels”…like us on Facebook!


Sweden orders fire alarms in hotel made of ice – FIRE!! Quick, throw some building on the building!


Irradiated corn plants produce self-popping corn – They could make quite a mess if not harvested in time.

AND THE WINNERS ARE:


Give me the fake self-popping corn. I'll be standing at the edge of the field with self-churning cows, selling butter to the on-lookers.


My bet is on the irradiated self-popping corn. This (if true) could create quite a ruckus if it happened at night!


i think it has to be the self-popping corn

Check out these fine blogs and congratulate them.

There is no Fishducky award this week for lack of funny comments.  It seems everyone was too annoyed with the Tom Cruise comment about acting being harder than soldiering in Afghanistan.

In Cruise's defense I think his quote was taken out of context and there may have been a sarcastic eye roll not reported.  He’s still an ass but…
Posted by joeh at 9:36 AM