A SOLUTION TO THE SEPARATION OF CHURCH AND STATE ISSUE

A SOLUTION TO THE SEPARATION OF CHURCH AND STATE ISSUE 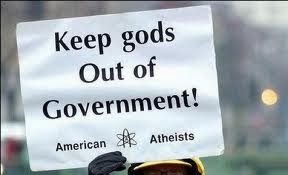 The following is the opinion of a cranky old man.  Opposing opinions are welcome, they are wrong, but welcome, and please no name calling…that means you, you big stupid head!

Every week I read about Atheists suing, or threatening to sue, local governments, and schools because of religious symbols and or any utterances of the words God, Jesus, Moses, Buddha, or Mohammed.  These Atheist groups find these symbols and utterances of any “divine” being or apostle to be offensive and they evoke the constitutional interpretation of separation of church and state to force the removal of anything in government that could be seen as religious.


Ninety-nine percent of the citizens in our country (a figure that includes religious, not so religious, and yes even Atheists), have no issue with these symbols or references to a deity.  The one percent of our population that does have an issue, or possibly just a demented agenda and too much time, is able to regulate against the desires of the other 99 percent.  This seems to run against the grain of what we think of as Democracy.


As usual, I have a solution.


Atheists need to create their own definitions of what we currently consider religious terms and symbols.  Words and symbols can have multiple definitions.  The swastika was the Nazi symbol of hate, it was also a Native American symbol of good luck…Choose your poison.


For instance God should be defined as: the creator and ruler of the universe and source of all moral authority; the Supreme Being, or


To Atheists: A word standing for nothing.


With this multiple definition, our legal tender would say:


“In the creator and ruler of the universe and source of all moral authority; the Supreme Being we trust,” or


Choose your definition.  There is no conflict of church and state, merely two different definitions of a word.


Is that so hard?


The cross is a Christian symbol of Christ’s sacrifice for our sins.  Let it also be an Atheist symbol for “ashes to ashes, dust to dust, when we die, we die, why all the fuss.”


End of problem.  Just put crosses all over the place and choose your interpretation.


If you don’t like what the Christmas tree represents, call it an Anti-arbor, the Atheist symbol for much ado about nothing, an Atheist symbol of not celebrating anything.  They could decorate it with…nothing!


“Deck the halls with lots of nothing.”


When we get our panties in a bunch because a picture of the town on city stationary shows a cross, when we get upset because a grave stone in a public owned cemetery has the word God, when teachers or judges or city officials cannot say “God bless you” after a sneeze, when students can’t wear a cross or a mezuzah on a chain we are living in a world gone upside down.


When the one percent dictates that the ninety-nine percent cannot use a word or a symbol on public land it is time to just get a grip.  Don’t like a word?  Give it your own meaning.  Don’t like a symbol.  Assign new meaning to it to fit your world and leave the rest of us alone.

The preceding was the opinion of a cranky old man, and not necessarily that of management...Mrs. Cranky.
Posted by joeh at 7:42 AM