HOW DO YOU DEFINE A HERO?

HOW DO YOU DEFINE A HERO? 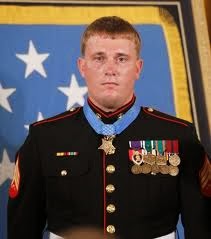 A crazed lady at a recent Oakland Raiders football game threatened to leap to her death from the third tier of the Oakland stadium.  A 61 year old Marine (I’d say retired, but does a marine ever actually retire?) on the tier below yelled for her to stay put.  The women jumped to her apparent death.  The Marine moved under her, arms outstretched to catch her, and broke her fall.


I think he just did define “Hero.”


I would like to say I would do the same thing as the Marine.  If a person’s life was in danger and I could do anything to help, I would risk my life to save a stranger.  I’d like to think I would be a hero.  Sadly, I doubt I would.  I’m pretty sure I would step aside and say, “That’s a shame.” I would not do what “anyone would do.” I am not anyone. I am not a hero.


“I just did what anyone would do.” That is why they are heroes.


Yes, if I was on that second tier and a stranger was about to jump I would think, “Damn, that crazy lady is about to die”…and then she would.  Sorry, I am not a hero.  I am not ready to risk my life for someone I don’t know, someone who is probably mentally disturbed and possibly not able to be rehabilitated.


There must have been dozens of people on that second tier that could have done “what anyone would do.”  Only the Marine did.  There was only one hero.


There must be something in the genes of heroes.  There is something where they can only do one thing, what they think anyone would do because they are compelled to do the right thing.


There are lots of potential heroes out there, men and women that have just not yet been put to the test.  Many are doctors, nurses, service men, firemen and policemen.  They stand prepared to do “what they would do for anyone else; just what anyone else would do.”


Except not just anyone else would do what they do.