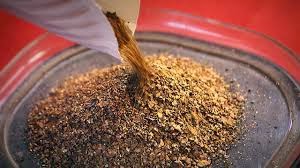 The “Discover” channel has done it again.  First they get me totally hooked on “The Deadliest Catch,” now they have given me “Gold Rush” fever.


“Gold Rush” is in its fourth season and I cannot keep from watching.  The first season was all about this bearded dude Todd Hoffman, his father Jack and crew, mining for gold in Alaska.  It was intriguing because they did not know what the frig (Todd’s favorite word) they were doing, but they did not let that stop them.


From that first year the show now covers three groups of miners.  Along with Todd’s gang there is this cranky old dude Fred Hurt and his son Justin (The Dakota Boys), and an eighteen year old kid Parker Schnabel.


It is impossible not to like these three crews.  The Hoffman’s never quit, and Todd’s dad Jack who is about 75 years old is tough as nails, plus nothing, and I mean nothing bothers him.


The “Dakota Boys” have an interesting father son relationship.  Justin listens to the “Old Man” but they will fight and cuss each other all the while their mutual love and respect is obvious.


Parker Schnabel is the teenage rock star of the show.  He learned everything he knows from his 92 year old Grandfather who only retired from mining two years ago.  Parker is a clone of his Grandfather who is wise, tough, and caring.  The love these two have for each other is clear and touching.  Parker has a work ethic reminiscent of what conquered our frontier and made this country great.


Every week I keep waiting for one of these groups to strike it rich and find tons of gold.  Each week it is disappointing as it seems mining for gold is not that easy.  In fact it is hard…really hard.  The conditions are rough, supplies are hours away and equipment constantly breaks down.


Every time something breaks down, the weather turns, or a bridge is out I think, “that’s it, show's over, there is no way they can go on.”  Most people would quit, but these guys suck it up and find a way to repair the un-repairable, survive the weather, or just build a new bridge.


For all this you would think they would find gold and go home rich.  In fact, last year the Hoffman’s found about 1.5 million dollars of gold.


However they spent five months of backbreaking labor.  They leased their mining ground for 20% of their take and their equipment, fuel and miscellaneous costs had to be at least 500 thousand dollars.


This year, the Hoffman’s are trying their luck in the jungles of Guyana while the Dakota Boys are sticking to Alaska and Parker is trying new grounds in the even colder north of the Yukon.


I am rooting for them to strike it big, but I expect they will be lucky to scrape out a little more than their costs.  Gold fever keeps them all going, but the only one that is really finding gold is the “Discovery” Channel.
They strike it rich every week and I watch them do it.
Posted by joeh at 10:43 AM