PRO-QUARTERBACK the board game – A SHOCKING NEW ALLEGATION!!

PRO-QUARTERBACK the board game – A SHOCKING NEW ALLEGATION!! 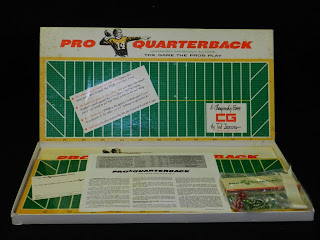 Several weeks ago I posted about a college fraternity championship contest with a football board game.
http://joeh-crankyoldman.blogspot.com/2012/07/pro-quarterback-board-game.html
The winner of the first and only Pro-Quarterback board game championship back in 1968 was Dave “The Dude” Doughty who defeated the favorite Vinnie “Pieman” DeGenarro.
Recently I learned of a shocking allegation that the game was fixed!  Well not fixed, but “The Dude” had a distinct and unfair advantage in this contest.

I had a chance to meet with a certain “Frog,” a fellow fraternity member back in 1968.  He read my post and felt compelled to disclose information which casts a cloud over "The Dude's" victory.
“Frog” was eliminated early on in the tournament.  He was defeated by “The Dude.”  Here is where the story gets dicey.  During his contest, “The Dude” spilled a small amount of coca-cola on the “right-side run card.”  They cleaned the card, but enough color was removed so that you could tell when this card was played.  If this was true, then “The Dude” held a distinct and unfair advantage over all other players in the tournament, including the Championship game.
I presented this information to then League President, Don “Squeak” Harjes.  “Squeak” hesitated to make a ruling, especially because “The Dude” a much beloved, even revered fraternity brother had passed away many years ago and could not dispute the allegation.
“Squeak” passed the information on to the then President of the Fraternity….Vinnie “Pieman” DeGenarro.
“Pieman” who always suspected foul play, immediately declared “The Dude’s” tournament record void.   The actual Tournament winner is now officially declared to be “Pieman!”
It was further deemed appropriate that any Statues, Plaques, or other memorabilia commemorating “The Dude’s” victory be removed…
“Hey, can I have a word in my defense?”
Sorry “Dude,” the President’s word is final!
“Dang!”
As gambling was never officially sanctioned, restitution of any betting on this game is up to the individual participants to resolve.
This is indeed a sad day in the short history of “Pro-Quarterback the board game.”   A Legend has been destroyed.  The reputation of a revered and beloved fraternity brother has been sullied.  The game itself has been tarnished perhaps beyond repair.
I am speechless.
Posted by joeh at 10:39 AM