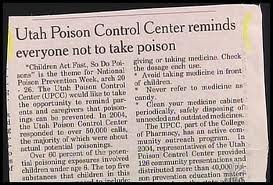 It’s Sunday time for Cranky’s stupid headlines and my stupider, sophomoric and sometimes offensive comments.
Supporters vow to keep cross in California veteran’s tribute despite court ruling – Does lack of a religious symbol indicate preference to Atheism?
Pornography at San Francisco library reportedly prompts privacy screens – Pee Wee Herman is a big fan of San Francisco library, wishes movies would also provide privacy screens
Senate passes cuts for all but richest Americans – Richest Americans get special treatment again…why do I have to get cut?  I hate getting cut…it freaking hurts!
Romney meets with Tony Blair, declines to criticize Obama – Romney chooses to take the high road when he realizes Tony Blair can’t vote in the election.
Best Way to Get Rid of Rotten Sponge Smell – Throw it the F out.  It’s a SPONGE!!
City of Boston advises teens on how to break up – “Err ah make shooah you leave the motah runnin when you paak the err ah caah, hide all shap objects, say it’s not you it’s me and err ah run like hell!”

Phelps complains about swim cap regulations – 70 something innocent movie goers get shot watching a movie, millions are unemployed, soldiers are going through hell in Afghanistan, and this multi-millionaire pot smoker who makes his living SWIMMING complains about his bathing cap! Wah wah wah.

Pace of baby-making could hold clues to economy, presidential race – President suggests workers increase output to more than one every nine months. *Cranky Old Man will probably not vote for President Obama but he is tired of the “It’s my ball” mentality that tries to win every election on a do-over or a technicality.  I know…the constitution…blah blah blah…that was written to keep friends of King George out of the race in 17 flipity-flip, President Obama is an American; win the election on the issues.  Cranky will not respond to comments on this comment.

** Readers are encouraged to submit their own silly headlines and stupid comments for next week’s post.  Credit will be given to the submitters unless they are really good, then cranky old man will claim as his own.  Submit to: jphag13@yahoo.com