I don’t know why, but you cannot insult the Irish.  You can piss them off if you disrespect their favorite team, you may start a fight if you catch them in a lie and call them on it because the Irish never lie, they only embellish.
Other than berating their sports team or challenging their story telling veracity, you cannot insult the Irish.
Maybe it's because at least one day of the year, everyone is Irish.
Uncle Skip sent me this last year 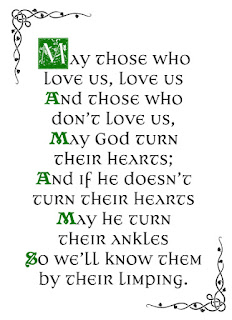