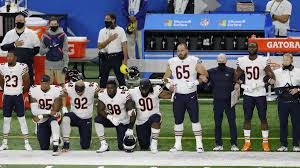 The following is the opinion of a cranky old man with little knowledge or expertise on the topic opined.  Opposing opinions are wrong but welcome.  As always please keep comments respectful and without name calling...that includes you, you big stupid-head.

Colin Kaepernick started it.  First not standing and then respectfully kneeling during the National Anthem before sporting events.  It ruined his career, but it did make a statement.  It brought attention to police brutality and profiling in the African American community.

Don’t get me bogged down on the “Bad Police” argument.  It exists.  Police are not always nice.  There have been a few occasions where they have not been nice to me or people I know.  Being nice is not a trait that tends to lead to effective policing.  Police deal with not nice people.  Not nice people do not respond positively to nice treatment.  African Americans are often treated “not nice” first, and maybe nice later.  I’m not a police officer and I am not African American so I have no further input or knowledge on the situation…only what I read and hear from the few friends I have in either group.  Clearly a situation exists.  There needs to be dialog and acknowledgement to address the situation.

Kneeling before athletic events helped to start a dialog.  Now it is just another distraction to stir up resentment.

To many people, kneeling indicates disrespect for the country and a dislike for police.  Not kneeling is disrespectful to your teammates and to some might even be racist.

I have a Cranky solution.

Players should take a vote and agree to all act together.  Unity is very important to any team.  If the decision is to kneel than this is what I suggest.

Players all kneel together at the start of the anthem to call attention to systemic racism in the country…actually the world.  Then when the anthem reaches "hailed" at “Oh, say can you see by the dawn’s early light What so proudly we hailed” all players “Rise” in unity to show respect for the flag and the country.

This simple act would garner more attention than standing at attention or kneeling.  It would speak to wanting improved race relations in the country while also showing proper respect to the flag and all who have sacrificed for the country.  It could become a sporting tradition.

It would be a healing gesture, not a divisive act.

The preceding was the opinion of a cranky old man and not necessarily that of management...Mrs. Cranky