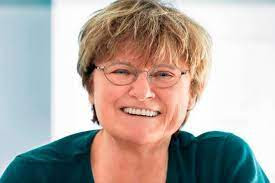 On the last day of this month which celebrates women, I choose to celebrate Katalin Kariko.  Katalin is not as well known as Hillary, Kamala, or Nancy.  Most people do not know her gift to the world.  I have never heard of her until today when Captain Don sent me an article.

“...In 1978, Katalin Karikó was a young scientist at the Biological Research Centre in Szeged, Hungary, when she started working on the idea that it could. She left Hungary for the U.S. in the 1980s. At the University of Pennsylvania, she still struggled to design mRNA that the body did not immediately reject. When her research failed to attract the support of government grants and university colleagues, she was demoted.”

Demoted for not following THE science; but because she followed HER science, the technology of teaching the human body to defend itself did not go unexamined.

The article goes on to explain the science, but it did make my brain bleed.  Suffice to say it took 40 years of really smart people following the lead of Katalin to develop the Covid vaccine overnight.  The technology mRNA standing for messenger(or modified) ribonucleic acid is where the Moderna company derived its name.

In addition to the Covid vaccine, mRNA technology might be used to create better flu vaccines every year, might save millions by protecting people from malaria, might be used to attack specific cancer tumors, it might have uses yet not conceived.  It might become one of the greatest technology breakthroughs of this or any century.

So, when you get your shot, you can thank Don, sure he helped remove some barriers.  You can thank Joe, he helped the distribution.  You can tip your hat to Pfizer and Moderna, but the biggest thank-you should go to the person who had an idea and would not let others change her focus.