Who’d a Thunk It?

Who’d a Thunk It?

Sometimes when you run out of stories you just have to steal someone else’s.  In this case I am stealing one from Fraternity pal “Captain” Don.

Don’s moniker used to be “Squeak”, a name I’m sure he did not cherish.  Pretty much no one likes their nicknames.  Guys generally name their friends in the least likable way possible…I don’t know why; it is just a guy thing.  Nobody wants to be called “Frog” Hogg-jowles” “Gawk” or “Coconut head” but that is what happens.

Don had a bit of a high pitch voice and thus “Squeak.”

Years later Don got his pilots license and owned a small plane.  From time to time, we would fly out to play at  his favorite golf course.  I decided that I did not want to risk my life in a small plane with a guy named “Squeak” so his name became “Captain” Don.

Don lives in the farm lands of New Jersey…yes, Jersey does have farms…he raises nothing except a few cattle possibly to maintain a “farm status” property.  On his several acres of land Captain Don has a small pond.  The pond serves no real purpose other than it is pleasant to look at while hoisting a beverage on his patio.

Don’s “farm” has a truck.  When it snows he uses it to plow his long driveway and the driveways of his neighbors.  Clearly Don enjoys plowing snow in his big-ass truck.

He also has a riding mower, a Christmas present to his wife, Peg.  Don clearly does not enjoy mowing the lawn.

He also has a Utility Vehicle or UTV which he uses to drive to his mail box and occasionally to move stuff around…pretty much it is just a big toy.

This fall Don was teaching his young grandson how to operate the UTV.  What young boy would not love to play with such a cool toy. 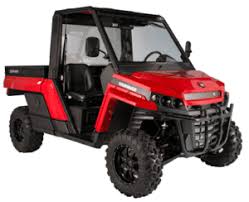 Now, Captain Don can fly a plane, but he apparently is not too good at instructing 10-year-old boys in the operation of a UTV.  He showed him how to start it up, how to steer, and how to shift.  Apparently, he did not teach him that the UTV will roll when in neutral, on an incline and without using a parking break.

The grandson was fine.  The UTV not so much.

Captain Don needed a new UTV.  How else could he pick up the mail?  He found a place in a sketchy area of Jersey that sold used UTV’s.  Captain Don took me along to this place to check out their goods.  I think he was looking for some 74-year-old muscle to back him up in sketchy land (What was he thinking?).

The proprietor had many vehicles for sale and at a reasonable price.  Captain was not too quick to make a deal.  I think he was leery about trusting anyone with a neck tattoo that said “GO AHEAD MAKE MY DAY.”

Upon leaving said sketchy place Don was lamenting on the cost of a used UTV to replace his non-floating one.

I commented, “Too bad the submerged UTV was not covered by insurance.”

I actually heard a light bulb click-on above Don’s head, followed by a palm to forehead smack.

“You know I never thought about that.  That’s a good idea.  It should be insured under my homeowner’s policy!”

Insurance did indeed eventually cover a good portion of the cost on a replacement UTV.

Now what makes this an interesting story to me is Don’s occupation.  The Captain is not a professional pilot.  He is not a real farmer.