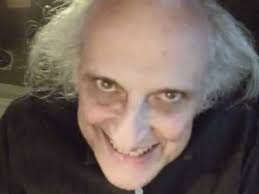 Ah, the good old days before social distancing, and when stores were open.
a Cranky/Creepy rerun from October 2016

On the way to the hotel for this years fraternity reunion, Mrs. C wanted to stop at Kohl’s for something.  First she dropped me off at the cigar store about a block away, there may be some scotch and cigars involved at the reunion.  I made my purchase and was off to meet Mrs. C at Kohl’s.
I walked in the store and immediately saw Mrs. C in the check-out line.   I walked over to her, past several people who gave me that “you better not be cutting” fuzzy eyeball.  She did not see me; her back was turned.  As I leaned over to show my face she turned away to look at some merchandise.  At this point I started to reach out and grab her backside on the sly like I sometimes do…hey, I like her backside.
Just before I made contact something seemed wrong.  There were no red stripe highlights in Mrs. Cranky’s jet black hair.  The pants she was wearing did not look familiar.  I was about to say something when Mrs. C turned my way, and it was not Mrs. C!
I have a feeling I may have looked just a little creepy as I mumbled “excuse me” turned on my heels and got out of line.  Now I was looking for Mrs. C and wandering around like someone who does not belong and was only looking for trouble…you know, looking creepy.
(I’m surprised I didn’t get drawn in magnet like to a certain ex-school teacher named Val who attracts creepy people.)
At this point I realized the store did not look familiar.   I was in T.J. Max not Kohl’s.
I quickly skulked out and I swear I saw several people on their cell phones, no doubt dialing 911.
I moved up one store to Kohl’s and quickly met up with Mrs. C.
“We need to get out of here right now.”
“OK, I’m done, what’s wrong?”
“A really creepy guy almost grabbed your ass at T.J. Max just a minute ago.”
“What?  I was never in T.J. Max.”
“I was, and I almost grabbed your ass.”
“How could you almost grab my ass if I was not in T.J. Max…oh wait, WHAT HAVE YOU DONE?”
“Almost did; I was the creepy guy.”
“Let’s go, you can explain in the car, but I’m pretty sure it is going to end with you being a Jerk!”
And also a creep!
Posted by joeh at 12:11 PM