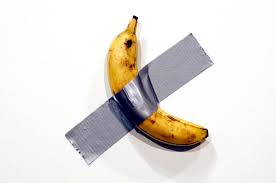 What is genius?  Sure, Einstein was a genius.  He solved difficult issues of physics that few people understood the issue, never mind the solution.  So, genius is being several steps ahead of the most intellectual persons in a given venue or endeavor?


Google defines genius as: exceptional intellectual or creative power or other natural ability.


That means almost nothing to me, but then I am clearly not a genius.


I must say though I have seen an example of genius in the art world only recently.


An artist took a banana and taped it to a museum wall and declared it a piece of art.  Now, people laughed at this assertion and poked fun at how ridiculous it was to declare a banana taped to a wall to be art, and yet there it was…a banana in a museum taped to the wall with lines of people to view it.


In a way, part of the genius is to take a creation of God, and declare it a work of art, which of course it actually is.  Come on now, a banana is delicious, it has its own protective cover that is easily opened and can even be re-covered to finish the delicacy within at a later date.


Genius! The banana like all creations of God is GENIUS, and this “artist” recognized that and took credit for God’s art work by simply taping it to a wall.


Now the banana could not last forever on the wall, so the artist issued a certificate of “original art” and deemed it acceptable to replace the banana with a new one as needed.  The certificate assured the continued value of the “banana art”.  Genius!


Apparently, he got someone to pay $120,000 for the banana, the duct tape and the certificate.  If that is not GENIUS, I don’t know what is.


Then, I read what is truly genius, an act of genius that surpasses even the genius of taping a banana to a wall and declaring it to be art.


Someone who calls himself a “Performance Artist” came into the museum, took the $120,000 banana off the wall and ate it!


Performance art; to simply eat a banana that was simply taped to a wall and sold for $120,000.


That is GENIUS that even Einstein could have never imagined. 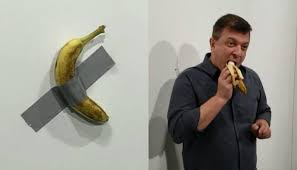 E+MC2?  Yeah right; like anyone really has a concept of what that means.


But eating a $120,000 banana taped to a museum wall? Even I can recognize the genius in that act.