IF Your Toilet is Running Do you Have To Catch It?

IF Your Toilet is Running Do you Have To Catch It? 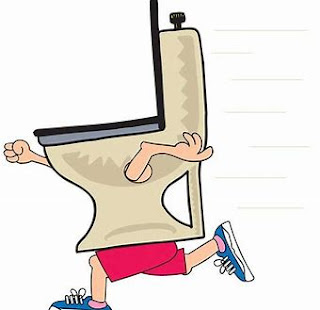 
“What?” When I am called by my proper name it is never a good thing.


“The toilet is running”


“It will stop, it always takes a long time to fill up.”


“It’s been running for five minutes.”


This friggin toilet in our guest bathroom takes forever to fill.  Sometimes it just keeps running, and you have to jiggle the handle to make it stop.


Now I know some readers are going to offer suggestions on how to fix this.  Knock yourself out, they don’t work.  I’ve tried all the fixes.  They don’t work.  Well I may think they work for a while, but it is an intermittent issue.


Jiggling the handle immediately after flushing does not work.  You have to jiggle only after it is apparent the tank will not fill to the shutoff level.


Now after every flush I have to hang around for about three minutes.  If it doesn’t stop running, I jiggle the handle.  I can’t tell you how many times I’ve gone to jiggle and before I touch the handle the tank is filled and the running stops.


This makes me figure I have to let it run longer.  That is when I get the “Joseph!” call from Mrs. C.


We did that also… I told you we’ve tried everything. Why do some readers have to try and solve every problem?


I think I waste about an hour a week of my life waiting to see if I have to jiggle that stupid handle or not.


What...why not just use a different toilet, don’t you have more than one?