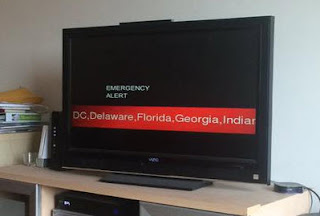 Periodically, generally after 1AM, The New Jersey Emergency Management System conducts a test.
This test consists of the TV going blue and an unreadably message drifting across the top of the blue screen.  Then a voice comes on that sounds as if the announcer was a drop-out from the NYC Subway system.  If you have not had the pleasure of riding a NYC subway, especially years ago before pre-recorded messages, the announcements sounded something like this,
This is the (lots of static) fremading train making all stops between (lots of static)  8th frem and friourtheenth arbendo; next stop (lots of static) please watch your (lots of static) when exiting the train.
It seems that the New Jersey Emergency Management System demands weekly testing of the ability to interrupt all TV channels and leave indiscernible instructions on any pending emergency and what steps to take to protect yourself.
I suppose that if you do not watch a lot of TV, you will miss this message and your inevitable demise will come as a complete surprise.
I think I might prefer the surprise, rather than running around like a chicken without a head, panicking and trying to find out what the Emergency Management System warning just said.
“Was that just a test?”
“I don’t know, it sounded real.”
“What is a ‘blerg popping pundle’ and where is the nearest ‘shendal’ that we need to ‘pretend to cobble to?’
“I don’t know, I didn’t understand a thing they just said.  It sounded serious, but if they want us to ‘cobble to the nearest ‘shendal’ to avoid the ‘blerg popping pundle,’ why did the ‘Leave it to Beaver’ re-run come back on the air?”
“You know what, turn to the Game Show Network, if I’m about to be ‘blerg poppin pundled,’ I want to be ‘pundled’ watching ‘Cash Cab.’”
I appreciate that New Jersey has an Emergency Management System. It is great that they are so concerned about testing this system.  I do have to wonder, with all these tests, does anyone not realize that the only thing they are currently capable of doing is interrupting a show at the worst possible time, scaring the crap outta people, and telling us nothing?
Posted by joeh at 11:30 PM