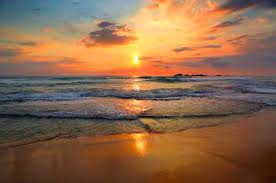 Mrs. C left the beach early this morning as she has work tonight.  I was left all alone.  The beach is just not as good when you are all alone, so I drove home, picked up my clubs and played nine holes of golf.


I stopped off at home, dropped off my clubs, chatted a bit with Mrs. C and left for the beach.


I took a quick refreshing dip in the ocean, showered, enjoyed a light cocktail, fussed around with my guitar for a while and then took a nap.


After my nap I enjoyed dinner.  Dinner was a doggy-bag chicken saltimbocca from the night before.  It was a very good left-over.  After dinner I went to the bench on the beach with a tall glass of wine and a good cigar.  I watched the fishermen not catch fish.


An osprey dove right where I had taken my afternoon dip and came away with an eight inch skate, a ray like fish.  He took it back to his nest on the bay while I saw a fisherman actually catch a similar sized skate.  The ospreys skate was not as lucky as the one caught by the fisherman, it was not released; the one caught on a hook was set free.


Another osprey dove and took off for the bay; I did not see its catch, while a third dove in front of me and also came away with an unidentified fish.  On the way to its nest it was harassed by a gull hoping to make the osprey drop the prize.  Life is tough for the birds.


Not so tough for me; it was all around a good day.


Tomorrow I will rise early to watch the British Open golf championship on TV before I hang on the beach.


It was such a good day I almost went to the quick mart to buy a lottery ticket.


I did not.  Upon further reflection, I decided I already hit it.
Posted by joeh at 10:10 PM