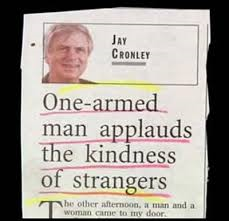 It is time again for


This week’s stupid headlines and my stupider, sometimes sophomoric comments.


Sand sculpture of busty Cape Cod mermaid draws complaints – I’ve got 99 problems, but sand boobs in a bikini ain’t one.


Yale dishwasher canned after breaking 'racist' stained-glass window – I don’t know a thing about the “racist window” but am shocked to see the name Yale next to dishwasher.


Sanders supporters reportedly to hold Philly 'fart-in' – That’s one way to air out your grievances.


Marines playing Pokémon Go catch attempted murder suspect – Scramidoo swears he didn’t do it, says it was Pincachoo in the library with a candlestick holder.


British county now classifying cat-calling as a hate crime – What’s the point, they only ignore you anyway?


New study busts long-running conception myth – So it can happen from a toilet seat?


Mick Jagger becoming a dad again at 72  –  So he can get some, satisfaction and he gets some, girly action.


*I have to have at least one Florida headline.


Come back next week for more


STUPID HEADLINES
Posted by joeh at 7:31 AM